Richard Painter, the man "without a moral compass"

A brief follow-up on this post earlier in the week, about Richard Painter's harassment of an innocent third party, Sarah Braasch, based on falsehoods (Richard lies a lot)--below the fold, for anyone interested.

Richard Painter (Minnesota) now attacking Sarah Braasch, a vulnerable and traumatized young woman, and only because I had defended her

Apologies to readers bored with this malevolent buffoon, but Richard Painter's latest stunt is even more despicable than trying to smear some of my colleagues as racists based on nothing.  It, at least, presents an opportunity to air the actual facts about the target of Richard's harassment, Sarah Braasch (a lawyer who is now a PhD student in philosophy at Yale). I asked Ms. Braasch whether she was OK with me exposing his malicious and dishonest behavior, and she said she was.  I have no doubt--since Richard appears to be without a moral compass--that he will attack her (and of course me) again. [UPDATE:  As expected.]  But the truth should prevail.

U of Minnesota law professor calls out Richard Painter's misrepresentations

A brief follow-up on yesterday's post about Richard Painter's serial dishonesty.   In typical Trumpian fashion, Richard simply doubled-down on his lies yesterday.  But now his Minnesota colleague, Professor Daniel Schwarcz--with whom I had the original discussion about academic freedom that Richard has misrepresented in dozens of posts over the last seven weeks--has weighed in.  While Professor Schwarcz disagrees with me about the academic freedom issue, he did note the following: 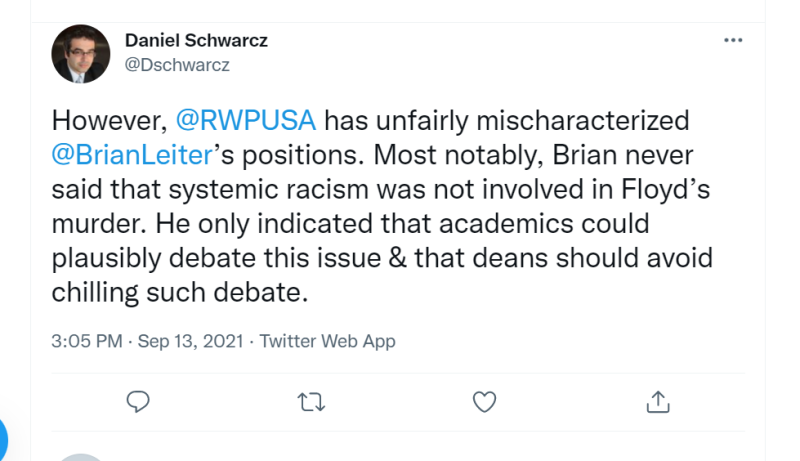 Professor Schwarcz put the point more strongly in an email to me:  "I am truly sorry that you've had to endure what, I agree, has been a terrible misrepresentation of your statements and attempt to twitter-harass you."  I thank Professor Schwarcz for his tweet and for permission to quote from his email to me.  Richard's bad behavior puts his colleagues in a difficult position, and I know a number of them are embarrassed about all this.  I am grateful to Professor Schwarcz for speaking out, and I hope others will as well.

ADDENDUM:  A funny email this morning from a law professor in California:  "I looked at Painter's twitter feed last night. It is amazing, both in terms of how much time he spends on it and how much of it is unhinged vitriol. It is a shame that faculty do not have a 25th amendment to invoke against their colleagues in situations like this."

Some readers will recall some posts from July about Twitter's most unhinged law professor. Remarkably, he continues to lie about me almost two months later, I guess because he's not used to getting any pushback on his unethical behavior.  Here is a tweet from September 8 (although he's made the same false claim literally dozens of times over the last seven weeks!), which also included a screen shot of an earlier tweet of mine, lifted out of context from an exchange about academic freedom:

Richard Painter: "either dishonest or blinded by righteousness" (updated)

That was Penn lawprof Jonathan Klick's apt assessment (noted earlier this week) based on his own experience of having Painter "Twitter shit" on him and his work.  Based on recent events, I will go with "dishonest."  Fear not, dear readers, I do not plan on regularly reporting on the unhinged Twitter behavior of this character, but the latest incident is so stunning and sleazy it deserves notice, but below the fold and only for those interested.

Prior to last week, I'd never had (to my recollection) any interaction with Professor Richard Painter of the University of Minnesota, a moderately well-known expert on corporate law and legal ethics.  As some readers will recall, Professor Painter had the dubious distinction of agreeing to serve as the White House ethics lawyer for George W. Bush in 2005-2007 (i.e., after the unlawful war of aggression against Iraq).   But in more recent years, he's been on the side of the angels, crusading against corruption in the Trump Administration.  In 2018, he entered electoral politics, running against the incumbent Senator Smith in Minnesota in the primary, albeit losing by a large margin.

For reasons unknown to me, on July 22, Professor Painter called attention to a blog post of mine from February of this year regarding the controversy over Professor Mark Ramseyer's revisionist view of Japan's use of "comfort women" during WWII, which appeared in the peer-reviewed International Review of Law & Economics.  Professor Ramseyer's article has been subjected to severe criticism by other scholars.  That is how academic life and academic freedom works:   scholars get to publish their views, and other scholars get to respond.  Scholars also get to be wrong, including seriously wrong.  The hard question raised by L'Affaire Ramseyer is how, consistent with academic freedom and scholarly norms, we make decisions to retract after peer-reviewed publication.  My view, expressed in the earlier post, is that the standard for retraction should be intentional wrongdoing, such as fraud.  (Plagiarism, intentional or otherwise, should also be grounds for retraction as well, since it can be clearly established in any case that warrants retraction.)  The reason is fairly obvious:  every scholarly dispute could be turned into a demand for retraction absent the higher bar I propose. And in that world, publication after peer review would not mean very much.

In any case, Professor Painter was livid, not only at the "shocking arrogance" of one of the editors of the journal that published Ramseyer's article (Penn's Jonathan Klick), but at law & economics scholars and game theorists generally (and again)!  He declared that the editor who accepted Ramseyer's article must be a "sick puppy."  Professor Painter pronounced that, "Neither Leiter nor Klick knows what he's talking about. Academic articles with demonstrably false claims are retracted by reputable journals."   He cited no examples, which is not surprising:  outside of articles involving mathematical or calculation mistakes, almost all cases of retraction I have seen involve intentional wrongdoing by the authors (e.g., fabricating evidence or data) or plagiarism.  In addition, very few of the specific claims in Professor Ramseyer's article are "demonstrably false," although the critique linked above raises serious doubts about several of them, about his overall thesis, and about the quality of the scholarship (most of the critiques pertain to the interpretation of evidence, the omission of evidence, cherry-picking evidence, and not to falsehoods per se).  If we credit all the claims of the critics (at this stage, I see no reason not to), Professor Ramseyer's use of evidence was selective, and occasionally quite unreliable; and his citation practices were poor.   These are serious criticisms, but they do not add up to a case for retraction of the article after it passed peer-review:  they warrant published replies and perhaps an erratum for one or two claims that seem clearly misleading given the evidence (e.g., the apparently false claim that the girl Osaki was not deceived by recruiters).  If the criticisms survive scrutiny, Professor Ramseyer's reputation and that of the journal will suffer.

I had a bit of Twitter back-and-forth with Professor Painter about this on Friday evening July 23, but when it became clear he wasn't being remotely serious (he was even chided by Professor Garrett Epps (Baltimore) for his mocking me as a quote-unquote-moral philosopher), I said "good night" and invited him to get in touch if he wanted to have a serious debate about the norms governing retraction of peer-reviewed articles.  He did not take me up on that offer.

...which is generating quite a bit of controversy in South Korea as well as back home (see also).  The article at issue is here and a more popular summary here (and here is an online resource about the general topic).   Fortunately, no one is calling for Professor Ramseyer, a leading expert on Japanese law, to be "cancelled."

(Thanks to Jonathan Adler for first calling this to my attention.)

UPDATE:  Law professor Jonathan Klick (Penn) writes:   "As one of the editors of the International Review of Law and Economics (though not the one who specifically handled Mark’s article), I can assure you, we’re getting lots of emails calling for Mark to be cancelled.  Luckily though, I don’t think any of them are coming from academics (and, quite frankly, most of them are incoherent)."

ANOTHER:  I've now heard that some academics are calling for the paper to be retracted, which is wholly inappropriate absent plagiarism or fraud, neither of which are even alleged here.   Not considering evidence that others think relevant is never grounds for retraction; what is called for are responses that also go through the peer review process.

JULY 22, 2021:   It's been brought to my attention that Professor Richard Painter (Minnesota)--who served as the "ethics" lawyer in the Bush Administration in 2005-2007 (so after the illegal war of aggression against Iraq)--is seriously indignant about Professor Klick's comments and mine.  Alas, he neglects to demonstrate which claims in Ramseyer's article are "demonstrably false," as opposed to dubious, ill-supported, or contestable:   the motives of actors in historical events admit of interpretation, as historians know.  Perhaps Professor Painter's unsuccessful foray into electoral politics and the world of pandering soundbites has impaired his capacity for scholarly judgment and his understanding of academic freedom, which includes the freedom to be wrong in one's interpretation of historical events.