What are standard law school teaching loads these days?

I wonder whether schools that perform better on lists like the citation lists posted on this blog from time to time have lower requirements for the amount of teaching professors do and if so, how much. I am also curious to know what standard law school teaching expectations are these days, something others may also wonder about.  Could those of you who read this please post the teaching requirements at your law school in the comments? At my school, St. John’s, the default teaching load is twelve credit hours per year. Professors with chairs are expected to teach ten hours per year while early-career professors get a course reduction of about one course a year and in one semester in their first few years teach no courses. Professors may seek a research leave every seventh year consisting of a semester at full pay or a year at half-pay.

Comments are open; submit your comment only once, they are moderated and may take awhile to appear.  Include a valid university email address, which will not appear.   It would be preferable for posters to name the school in question, which is why I need to know the email address, even if you choose not to post your full name.

A longtime member of the University of Houston law faculty, where he was emeritus, Professor Olivas was a leading expert on higher education law and immigration law, and served in many public capacities, including as General Counsel of the AAUP, as President of the AALS, and as Interim President of the University of Houston-Downtown.  A UHD announcement is here, and a memorial notice from the Mexican-American Legal Defense and Education Fund is here.

The case against student-edited law reviews, an ongoing saga

The latest shot fired by Professor Paul Heald (Illinois).  He is, of course, right, but I don't expect anything to change.

This time in CHE; an excerpt:

Some professors lay the blame at Gerken’s feet. “I have the sinking feeling that the values of the school are being eroded under this deanship,” one faculty member told me. Another said Gerken is a “genuinely nice person who doesn’t like telling people hard truths to their face.” The critics, who sought anonymity, basically accused the dean of repeatedly caving in to progressive students.

Gerken’s defenders were likewise reluctant to have their names printed. Several I spoke with argued that those taking shots at the dean are the law school’s old guard, and what they’re really upset about is Gerken’s emphasis on diversity and on punishing sexual harassment. One faculty member told me he thought the dean’s critics were setting a poor example for students.

The fact that no one will talk frankly on the record speaks to an overall loss of trust between certain factions of professors. More than one of them mentioned to me that they feared their comments in faculty meetings would be recorded and leaked.

I hope this doesn't need saying, but:  secretly recording a faculty meeting and leaking the recording is not protected by academic freedom, and a tenured faculty member could be severely sanctioned for such misconduct.

"Do the U.S. News rankings rely on dubious data?"

CHE actually posted this as a question, and not a rhetorical one!

More on expenditures and the USNews.com ranking stew

All our candidates received offers this year (including those that only searched selectively), and several received more than one offer.  They are:

Adam A. Davidson’17, who will join the faculty at the University of Chicago.  He is currently a Bigelow Fellow at the Law School.  He graduated with Honors from the Law School where he was Articles Editor of the Law  Review and a Rubenstein Scholar all three years.  He clerked for Judge James Gwin in the Northern District of Ohio; for Judge Diane Wood on the the Seventh Circuit; and for Judge Guido Calabresi on the Second Circuit.  His areas of teaching and research interest include criminal law and procedure, constitutional law, federal courts, and race and the law.

Abigail Moncrieff ’06, who will join the faculty at Cleveland-Marshall School of Law at Cleveland State University, where she will also be Co-Director of the Health Law and Policy Center and have a courtesy appointment in the Department of Political Science.  She graduated with Honors from the Law School, where she served on the Law Review.  She clerked for Judge Sidney R. Thomas on the Ninth Circuit, before joining the law faculty at Boston University, where she taught for several years.  She is presenting finishing a PhD in Government at the University of Texas at Austin, with a focus on constitutional theory.  Her areas of teaching and research interest include constitutional law, administrative law, health law, legislation, and torts.

Joe Schomberg '17, who will join the faculty at Drake University.  Since graduating from the Law School, he has been a bankruptcy associate at Sidley Austin in Chicago.   His teaching and research interests include bankruptcy and commercial law

Daniel Wilf-Townsend, who will join the faculty at Georgetown University.  He is currently a Bigelow Fellow at the Law School.  He earned his J.D. from Yale in 2015, where he was a Coker Fellow.  He clerked for Judge Marsha Berzon on the Ninth Circuit and then for Judge Jeffrey Meyer of the District of Connecticut.  He practiced law for three years with Gupta Wessler in Washington, DC, focusing on class actions and complex litigation on behalf of consumers, workers, and government entities.  His areas of teaching and research interest include civil procedure, federal courts, contracts, consumer law, and administrative law.

Readers are no doubt grateful that I've said nothing about the unhinged Richard Painter for many months now.  Alas, he remains the same:  still completely dishonest and vindictive.  Amusingly, he's now running a carpetbagger campaign for Congress in a special election in a Minnesota district he doesn't even live in (God help those folks!).  I do wonder whether he's still collecting a salary at Minnesota, given that his full-time job seems to be politics and tweeting.

In any case, what apparently set him off recently was this New York Times article about the Berggruen Prize in philosophy (which my colleague Martha Nussbaum won early on).  I was quoted making the banal observation that giving the prize to Justice Ginsburg, who is not a philosopher, rather devalued the prize in the eyes of philosophers.  Here's how the Tweeter-in-Chief responded, after calling me a "sexist": 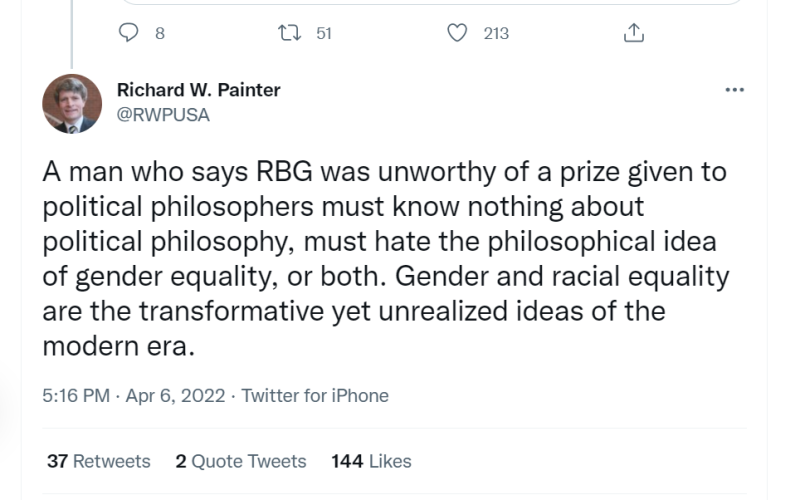 There is, indeed, someone who knows nothing about political philosophy in this discussion, but it's not me.  The irony of the rest of his smear is brought out by what I actually wrote on the subject:

It turns out there were only three living philosophers worthy of [the Berggruen Prize], so now it has gone to a judge, Justice Ruth Bader Ginsburg of the Supreme Court....Her most significant contributions to the law were in the 1970s, when she pioneered arguments, in both the law reviews and the courts, for ending gender-based discrimination. This was important work, but a far, far cry from the original declared purpose of the [Berggruen] prize. (Catharine MacKinnon would have been a more plausible choice, since she has both a more substantial theoretical corpus, and substantial practical impact as well.)

All about law school Deans...

...from the AALS.  A couple of striking data points:  "Most successful dean candidacies are initiated by someone else (62%)" and "More than one-half (59%) of deans are selected after a search that involves a search firm."  The latter is particularly surprising, given how clueless these search firms usually are, at least in my experience.

On the other hand, polling the Deans themselves about what helps them succeed in their role as Dean seems like an unsound methodology:  my impression is that a majority of Deans do not succeed and are not very good at the job (it's a rather difficult and often unpleasant job, or so it seems to me!).  It would be more interesting to poll just those Deans whom others (e.g., faculty, alumni, students) judge to be successful!