Her explanation is here.

This creates an interesting strategic dilemma for both USNews.com and other law schools.  USNews.com would seem to have good reason to "punish" Yale, much as the EU punished the UK for the stupidity of Brexit:  to send a message about the costs, lest other schools follow suit.  However, having elevated Yale for so long (thanks to the per capita expenditures measure), ranking it lower may not have any impact.

The bigger question is what other highly ranked schools will do.  (It is far too risky for lower ranked schools to withdraw until more of the higher ranked schools have done so, it seems to me.)   Will Stanford withdraw, even though it has been #2 for awhile now?  I've not discussed this with anyone here, so have no insight about what Chicago will do.  Harvard has been underranked by USNews.com for awhile, so has good reason to follow Yale.   If most of the top law schools withdraw, then USNews.com, even if it produces a ranking, will lose credibility, even in the eyes of journalists who bear so much of the blame for giving it credibility it never deserved.

Thoughts from readers?  Submit your comment only once, it may take awhile to appear.

UPDATE:  Dean Gerken notes that the USNews.com formula effectively treats those in public interest fellowships (or PhD programs for that matter) as "unemployed."   Noting that, Professor Dave Hoffman (Penn) has a more skeptical take on what's driving this move: 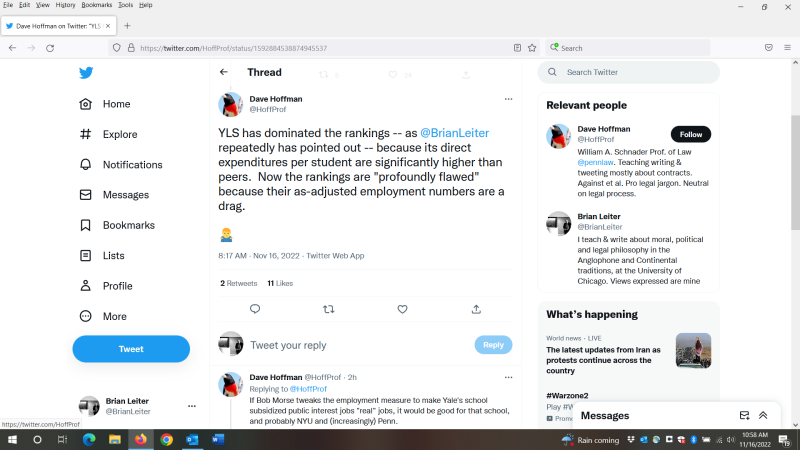 ANOTHER:   Harvard Law School is also declining to cooperate with USNews.com.  I'll post a link to a public announcement as soon as one is available.

I think Yale dropped out bc they knew they were going to lose top spot.

Yes, there are "reasons" but there always have been. Proximate cause is pending embarrassment of not being #1.

BL COMMENT: Maybe so, but we'd need evidence of that. I've seen calculations in the past that per capita expenditures are sufficient to keep Yale #1 even if every other metric drops significantly. Yale, for example, has been #3 in reputation for a couple of iterations, with no effect on the overall ranking.

Dean Gerken herself said what the objection is -- they don't think that USNWR should discount public interest fellowships. (Which seems to me like a reasonable position). I just don't think that this thing alone makes them profoundly flawed -- it's bad down to the turtles.

To BL's point about expenditures, if you reverse engineer the numbers (as we have done at Berkeley) it is only because the COLA adjustment in the U.S. News puts Stanford behind. Without the COLA -- Stanford would be No. 1. I'd add here that in response to some protests U.S. News changed its COLA adjustment in the last round, but the point still holds. Also -- given the decline in Yale's rep. ranking, it would not surprise me if US News' next adjustment to the rankings and how they are calculated in a manner which resulted in pushing to Stanford up to No. 1.

It was a long battle in the 1990s to get US News to adjust expenditures for cost of living; absent that, having to pay more for secretaries and utilities and everything else because of being located in an expensive part of the country meant a higher rank, which was silly. Stanford being #1 because Palo Alto is super expensive would be exceptionally silly too!

Maybe I missed something but I thought the comments about the importance of GPA/LSAT in rankings should be read in light of other decisions to reduce or eliminate standardized testing and render admit decisions more opaque in light of recent court decisions, etc

I wonder if these moves will prompt U.S. News to stop requesting data and, instead, rely upon the annual ABA reports that all law schools must make publicly available. The benefits are that the data is more likely to be accurate because it is reported directly to the accreditor and that the reputation and expenditure variables would no longer be part of the formula.