An illuminating Twitter thread here, that deserves to be widely read; some excerpts:

It is unfortunate that you are so willing to mislead your followers on the fundamental & longstanding precepts of academic freedom that protect professors across the country from being fired for, e.g., bad tweets. But perhaps some of your followers will want to know more1/

Academic freedom protections were fought for by profs b/c before those protections were in place profs were routinely fired for teaching, publishing or saying in public things that students, alumni, donors, uni presidents or politicians thought wrong, offensive or immoral 2/

When profs speak in public in their private capacity about personal opinions & beliefs, their free speech protections are at their strongest. Whether on twitter or on podcasts, bad opinions that others find disturbing or even dangerous are protected from employer reprisal 4/
You can, e.g., say that a sitting president is a dangerous fascist or his supporters are racists & not be fired by your university no matter how offended donors or politicians might be or how worried president-supporting students might be that you would treat them unfairly 5/

Thus,@AFA_Alliance has not hesitated to defend a prof for disparaging a govt official on twitter when a powerful GOP politician then called for that prof to be fired 6/

Thus,@AFA_Alliance has not hesitated to defend a prof for writing a pro-CRT op-ed when powerful GOP politicians were calling for that prof to be fired 7/

Professor Whittington's thread was in response to Richard Painter's repeated misstatements of the law, including claiming, falsely, that hate speech is not protected free speech (it is in America), and that academic freedom does not encompass offensive or even racist extramural speech by a faculty member (it does for any university that has embraced the AAUP definition of academic freedom, which most have).  While academic freedom does protect Painter's extramural Twitter ranting, it would offer no protection for his serial mistakes about the law of free speech and academic freedom if he were to make them in the classroom.
UPDATE:  This post appeared on a Friday, and when Richard discovered that Whittington was responding to his foolishness, he had a meltdown all weekend, featuring his usual lying, misstatements of the law and faux tough guy  posturing.  Just one example for amusement: 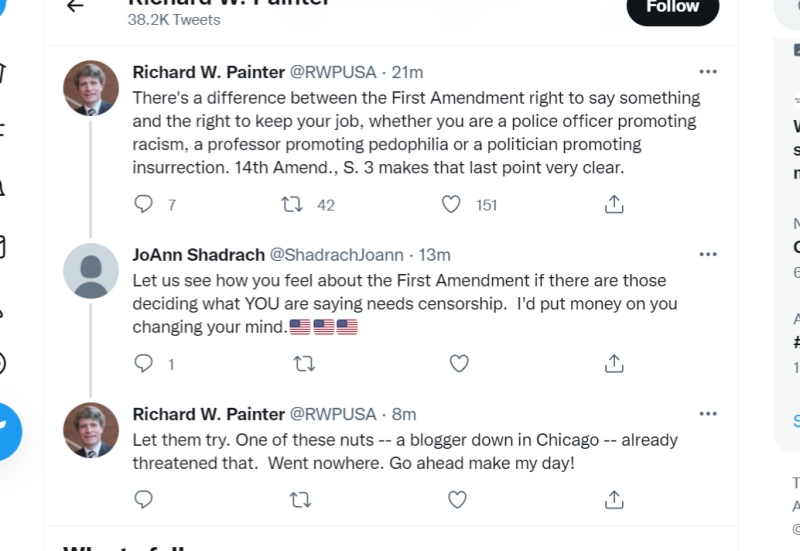 Of course, I did not threaten to censor Richard; the point was only that if he misstated the law in the classroom as often as he does on Twitter, academic freedom would not protect him from sanction.  Remarkably, he also misstates the law again:  the First Amendment does prohibit firing a professor at a state university for constitutionally protected speech (the subject under discussion).  As a constitutional law scholar quipped about the preceding:  "He really is testing whether extramural speech can demonstrate professional unfitness. Amazing."