FOR THOSE COMING HERE BY WAY OF RICHARD PAINTER, PLEASE SEE THIS AND THIS.

...despite the fact that she can't legally be fired for her offensive speech, as we noted previously:

Under the AAUP definition of academic freedom, "extramural" speech by faculty is protected speech that cannot be sanctioned by a university employer.  Yet even the First Amendment right of public sector employees to free speech can be outweighed by the employer's interest in running its workplace efficiently and without excessive disruption (the "Pickering test").  One can imagine a court being sympathetic to a private university's invocation of similar reasoning.  Certainly Professor Wax is speaking on a matter of "public interest" (immigration policy), but does her speech impede Penn's ability to perform its educational mission?   This will turn on information not in the public domain:  Do students still take her classes?  Do certain racial and ethnic groups avoid her classes? Is there any evidence of racial harassment or misconduct in the classroom?   Student offense should not be a metric for the acceptability of faculty speech, for obvious reasons; but at some point, offensive and inflammatory speech by a faculty member could, in principle, impede the school's ability to perform its pedagogical functions.

Given the now extraordinary external political pressure being brought to bear, it will be hard for Penn to show that any rationale it offers for terminating Wax is anything other than pretextual.

This is yet another instance where, to quote another law professor (speaking, in that case, about the unhinged Richard Painter):  "It is a shame that faculty do not have a 25th amendment to invoke against their colleagues in situations like this."  Principles of tenure and academic freedom, however, rule that out.

UPDATE (1/14):  FIRE has shared with me the following statement on the Wax case by attorney Adam Steinbaugh, an attorney for Foundation for Individual Rights in Education:

We are disappointed by Penn Law’s statement that it is considering bringing disciplinary action against professor Amy Wax, and call on Penn to immediately abandon that effort. Neither Wax’s tenure nor the freedom of expression Penn promises to its faculty are subject to public approval. They exist to protect not only popular but also deeply unpopular speech. Weakening these principles because people find one professor’s speech objectionable will dilute them for all faculty across the ideological spectrum, including those facing efforts by lawmakers to restrict academic speech on race in America. Abandoning these commitments will most hurt those untenured faculty who can only rely on their institutions’ commitments to freedom of expression.

ANOTHER UPDATE (1/15):  Predictably, the unhinged Richard Painter has been ranting and raving ever since he noticed the parenthetical reference to him, above.  (Thanks for linking, Richard, you put money in my pocket every time you send visits my way!)   He is sufficiently dense that he can't figure out what the point of the original post was, so let me try to make it clearer for simpletons:   the AAUP definition of academic freedom, to which Penn is committed, protects faculty from sanction by their university for offensive extramural speech.  (That's why you can't have a 25th Amendment for unhinged faculty.)   Arguably, however, if extramural speech interferes with the ability of the faculty member or the institution to performs its functions (hence the analogy to Pickering), a university could sanction the faculty member.  Unfortunately, the extraordinary political pressure being brought to bear to fire Wax would make any such move by Penn now seem merely pretextual:  it would be clear she was being punished for her offensive speech.

Richard has been demanding Penn fire Wax, since, of course, he has consistent and unbridled contempt for the academic freedom rights of faculty in all cases, not just this one.  (Recall his go-to lie about me, which also involved an academic freedom issue; this led one of his own Minnesota colleagues to write to me, "I am truly sorry that you've had to endure what, I agree, has been a terrible misrepresentation of your statements and attempt to twitter-harass you."  That's quite an achievement, when your own colleagues have to apologize for your serial dishonesty!)   Could Minnesota sanction Richard for his unhinged behavior under the Pickering standard?  I doubt it.   It is true that his endless vendettas of "twitter-harassment" against me and other academics--not to mention his sadistic and continuing persecution of a woman he has acknowledged has mental health problems--are not matters of "public concern"; and it is probable that this crazy behavior has damaged the reputation of Minnesota in the legal academic community; but I have seen no evidence it has interfered with the school's educational functions.

But let us end on a more amusing note.  Richard free-associates a lot, so somehow my original post (above, about Wax), leads him to tweet this: 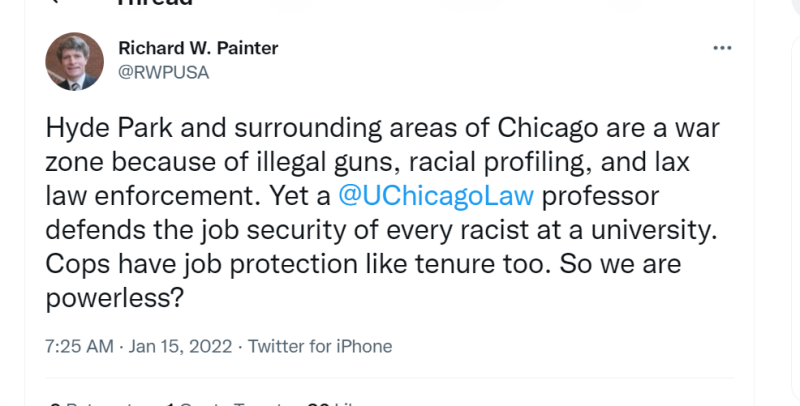 I live adjacent to Hyde Park and work in Hyde Park:   it is not a "war zone" and there is certainly not "lax law enforcement."   There is a huge problem with illegal guns and, of course, poverty.   I didn't "defend[] the job security of every racist at a university," I noted that the AAUP definition of academic freedom protects extramural speech by faculty, including highly offensive speech.  I explained how a university might proceed to sanction a racist faculty member, but noted that it may be hard to do so now given the outside political pressure.  Cops do not have academic freedom rights, and they are subject to a variety of speech restrictions.   Richard, you are either an instinctive liar or the dumbest law professor in America!  Some folks on Twitter, happily, do have his number: 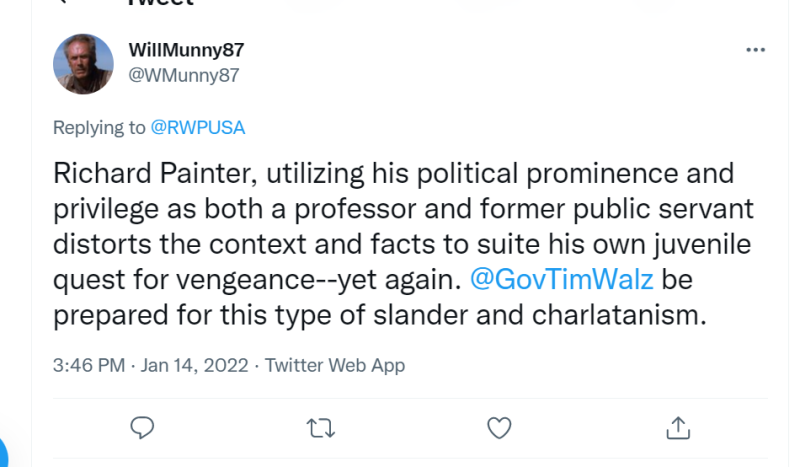 (Yes, Richard is actually thinking of running against Minnesota Governor Waltz. I've already had one inquiry from a free-lance journalist in Minnesota.  I'm sure the scrutiny of his unhinged behavior and serial dishonesty will no doubt increase if he goes forward with a campaign.)