Richard Painter (Minnesota) now attacking Sarah Braasch, a vulnerable and traumatized young woman, and only because I had defended her

Apologies to readers bored with this malevolent buffoon, but Richard Painter's latest stunt is even more despicable than trying to smear some of my colleagues as racists based on nothing.  It, at least, presents an opportunity to air the actual facts about the target of Richard's harassment, Sarah Braasch (a lawyer who is now a PhD student in philosophy at Yale). I asked Ms. Braasch whether she was OK with me exposing his malicious and dishonest behavior, and she said she was.  I have no doubt--since Richard appears to be without a moral compass--that he will attack her (and of course me) again. [UPDATE:  As expected.]  But the truth should prevail.

Ms. Braasch was vilified in the media as a "racist" in in 2018 in the misnamed "napping while Black" incident at Yale:   Ms. Braasch had called campus police about an unknown person (who turned out to be Black--Ms. Braasch couldn't see who it was, a fact not reported at the time) sleeping in the common area on her floor in the middle of the night (Ms. Braasch was the only resident of that floor). Yale, in fact, withdrew racial harassment charges against Ms. Braasch, a fact which also received almost no media attention.   Yale law and philosophy professors (including Alan Schwartz and Scott Shapiro) have vouched for Ms. Braasch's character, and her commitment to racial justice and civil rights.  The journalist Cathy Young, after a thorough investigation, wrote a lengthy article about Ms. Braasch (including her history of personal and family trauma, and her past issues with safety in Yale housing), which--while hardly uncritical of Ms. Braasch--exonerated her fully from the charge of racial animus (consistent, of course, with Yale dropping the charges against her).

Richard Painter acknowledged none of these facts (despite knowing of them), and simply repeated all last week the 2018 version of the story:  racist white student calls police on student for the crime of "napping while Black."  I learned of this only because Ms. Braasch was, understandably, extremely upset to be unjustly vilified, yet again, on a large Twitter account, and so many years after the fact.  You can sense her distress in this representative Tweet:

Despite her repeated protests, Richard has continued to harass her and ignore all the facts all last week, and continuing to today.

And why?   Because Richard discovered that I had reported on the actual facts about the case, and he saw this as another opportunity to try to smear me as a racist, this time for defending Ms. Braasch.  Indeed, he's taken to misrepresenting anything else he can find--at my blog or anywhere else in cyberspace--to smear me.  I had assumed that this was because he had been deprived of his go-to lie, thanks to Professor Schwarcz, but that was too optimistic:  like Trump, once he finds a lie, he can't let it go.  For example:

Some of his Twitter followers interpreted his smear as he intended, and denounced me as a racist. (Note to Richard:  the academic freedom issue does not turn on "how many" faculty hold a dissenting view; and omitting the academic freedom context to my remark is almost as misleading as your original lie, but it obviously serves your goal of portraying me in a false light.)   He's continued to repeat the original lie since.   Indeed, he's continued to attack Braasch based on falsehoods and smear me at the same time ("the man", below, is me): 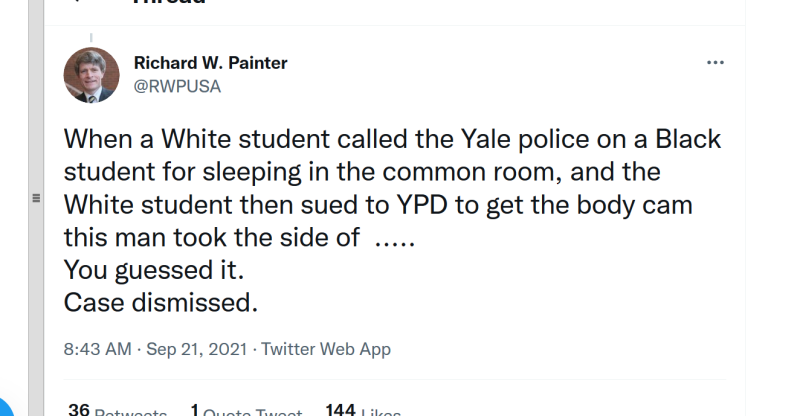 Once again, some of his followers see through his dissembling: 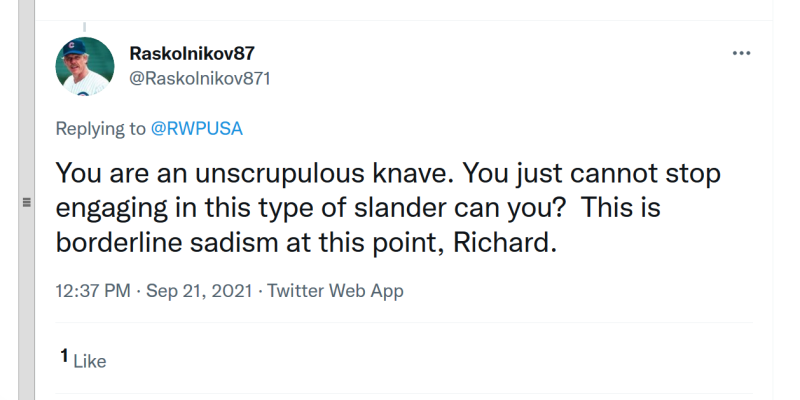 Attacking me is one thing, but attacking Ms. Braasch, an innocent third party, is quite another, and really is sadistic.  I've explained to her that in the legal academic community, Richard has a well-deserved reputation for being a "loon" (as more than one law professor wrote me last week), a reputation that apparently preceded his turning his "Sauron-like eye" in my direction (to quote another law professor's amusing quip).   That, however, is little consolation to Ms. Braasch, who will be trying to get academic jobs, while still trying to clear her name from the media storm of 2018.  Richard just helped make the latter task harder, while also causing Ms. Braasch significant emotional distress.  That's really despicable.

What an embarrassment for the University of Minnesota.

ADDENDUM:  This sums up this sorry spectacle quite well: 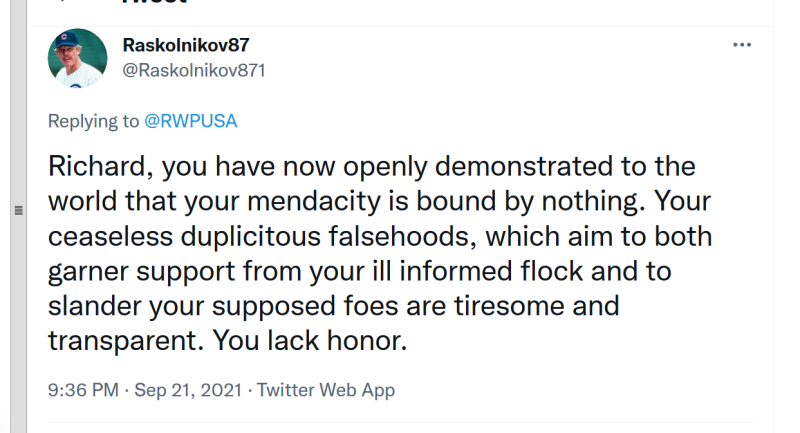