Some readers will recall some posts from July about Twitter's most unhinged law professor. Remarkably, he continues to lie about me almost two months later, I guess because he's not used to getting any pushback on his unethical behavior.  Here is a tweet from September 8 (although he's made the same false claim literally dozens of times over the last seven weeks!), which also included a screen shot of an earlier tweet of mine, lifted out of context from an exchange about academic freedom:

But I didn't say "racism was not involved in the killing of George Floyd," and he knows that since he quotes me!  I said that faculty may have different views about the role of racism in the murder of George Floyd, and that in order to create an environment in which faculty are free to express their views--a core academic freedom value--Deans (Presidents, Provosts etc.) should not declare an "official" position on the subject.  This is simply the "Kalven Report" understanding of academic freedom, that the University of Chicago adopted many years ago.

Richard knows all this, but continues to lie about it in order to portray me in a false light.

Fortunately, some of his Twitter followers can read.  Noting that the screen shot Richard included quoted me as saying, "The claim that the killing of Floyd involved racism or involved systemic racism are disputed interpretations," one observed: 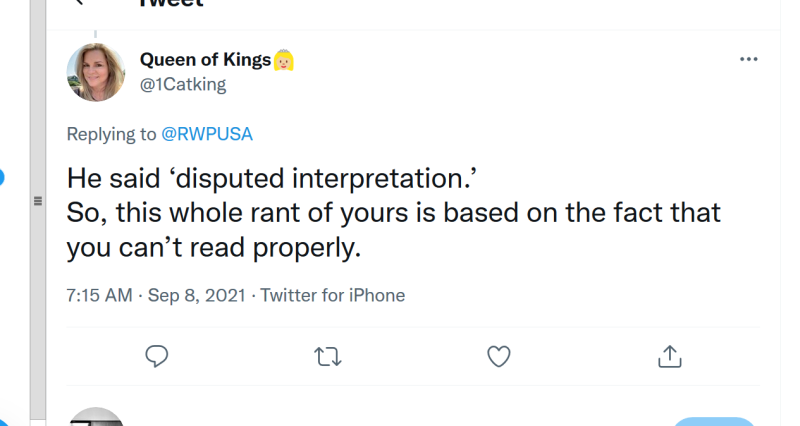 And another asked a question that must have occurred to those following the saga of Richard's obsessive behavior: 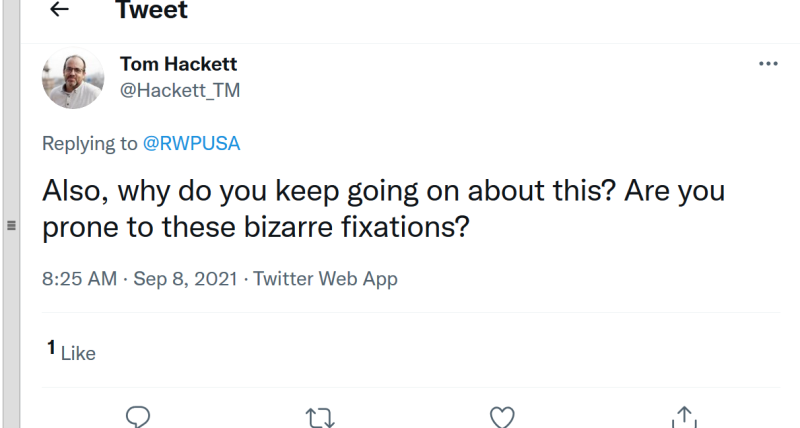 The answer, sadly, is yes.  He's been "twitter-shitting" on Jonathan Klick (Penn) for months now--misrepresenting and mocking his scholarship--and one of his other victims (who did not want to be named) wrote to me that, "As Kamenev is supposed to have said about Stalin: 'My fondest wish is that he forget that I exist'....I applaud your willingness to take him on. My own temperament leads me to just try to stay out of his way as much as I can. He seems to require even less provocation than Trump before he starts to explode at someone."

Richard even tried to smear other law professors (including two of my colleagues) as racists; commenting on this paper about lax tenure standards in law schools by three younger scholars (one of whom, contrary to Richard, is untenured), he tweeted: 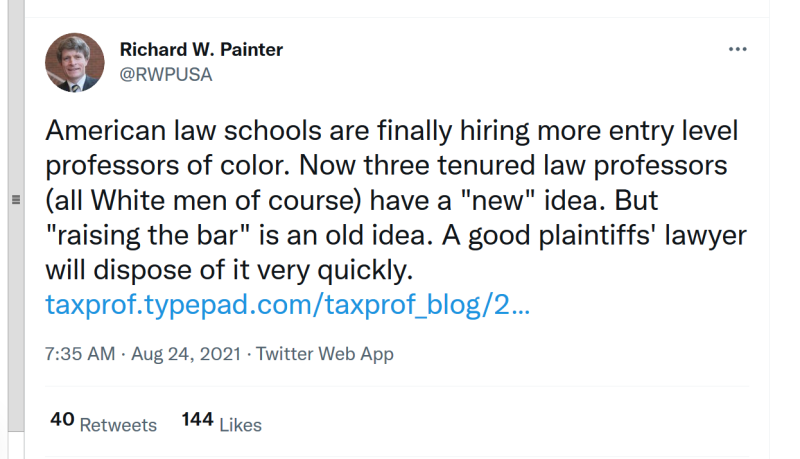 As one law professor wrote to me:  "it is pretty funny that he’s trying to dunk on [the authors] for racism while himself clearly accepting as a given that minority professors won’t be able to meet even slightly higher bars."  Ironically, the authors address that topic, and find there is no disparate impact on people of color, who do very well by the citation metrics they study.

Richard's level of dishonesty is astonishing for a tenured professor who purports to be an "ethics" expert, but opportunistic and reckless imputations of racism to other scholars is truly beyond the pale.

What an embarrassment for the University of Minnesota.

UPDATE:   One of Richard Painter's colleagues at Minnesota has called out his misrepresentations.