Richard Painter: "either dishonest or blinded by righteousness" (updated)

That was Penn lawprof Jonathan Klick's apt assessment (noted earlier this week) based on his own experience of having Painter "Twitter shit" on him and his work.  Based on recent events, I will go with "dishonest."  Fear not, dear readers, I do not plan on regularly reporting on the unhinged Twitter behavior of this character, but the latest incident is so stunning and sleazy it deserves notice, but below the fold and only for those interested.

The background:  in 2019, via Samuel Moyn at Yale, I discovered a fascinating series of interviews with leading historians (including Gordon Wood, James McPherson, James Oakes, and others) who were highly critical of the NYT's "1619 Project" led by the journalist Nikole Hannah-Jones.  I covered the critcal commentary of these historians extensively on my philosophy blog.   In December 2019, a reader called to my attention Ms. Hannah-Jones's idiotic attempt on Twitter to rationalize all the errors, which was certainly worthy of the quip of the Austrian critic and aphorist Karl Kraus with which I led the post ("No ideas and the ability to express them:  that's a journalist"--the link I included takes one to a parody of that "empty vessel" Thomas Friedman).  None of this is really surprising when one recalls that the former NYT editor James Bennet was an imbecile, without judgment.

Enter Richard Painter last night.  Unfortunately for him, his first tweet linking to my post about Ms. Hannah-Jones was flagged for me by a colleague, so I appended the following welcome at the top of the blog post:  "WELCOME TWITTER FOLLOWERS OF RICHARD PAINTER!   Here's the post that every law professor in America has read that Richard doesn't want you to see.  Do follow the links, below, to see the criticisms by professional historians of the 1619 Project."   Richard quickly deleted his tweet, and for the obvious reasons.

Within ten or fifteen minutes he returned with a screen shot of the blog post (so readers wouldn't benefit from either the link to my earlier expose or the links in the blog post to all the historians who had critiqued the 1969 Project), writing as follows:

This is one of several defamatory blog posts used to attack Nikole Hannah-Jones during her tenure bid at UNC. It’s an incoherent rant throwing around words like “imbecile.” As is obvious here, the posts are being altered at this time, so I am posting screenshots.

Even by Painter's low standards, this was shameless dissembling:  (1) the blog post was from 2019, so had nothing to do with "her tenure bid at UNC" which was in 2021; (2) I criticized on academic freedom and faculty autonomy grounds the UNC Board's bad behavior during the tenure case quite extensively on my philosophy blog; (3) the original blog post was not altered at all,I just added the "welcome" (noted above) to his Twitter followers, which is what he really didn't like; and (4) opinions are not defamatory, as Painter knows, which is why when he calls me, inter alia, a "crackpot," "a wimp," a "scared kitten," a "nihilist," a "narcissist," the "nuttiest person on Twitter," and an "extremist," he hasn't defamed me, he's only made himself look foolish.

Painter continued to Tweet the lie about the blog post being altered to "cover [my] tracks," and corrected none of the errors, although they were all pointed out to him.  He tried his best to reframe all this as "white professor" attacks "Black professor," even though Hannah-Jones was not a professor in 2019, and the focus of my critique was plainly on her feeble attempt to deflect serious criticism of her journalistic work--putting her in the company of other NYT hacks like Friedman and Bennet, as was obvious if Painter had permitted his readers to follow the links.

This is really breathtaking dishonesty from a guy purportedly interested in "ethics."

I'll just conclude with something I said regarding the UNC Board's bad behavior in the Hannah-Jones case:

It is astonishing to see the attempts to rationalize this naked attack on faculty autonomy.  The issue is not whether any particular observer thinks Hannah-Jones "deserves" this appointment; I myself have noted plenty of serious scholarly criticisms of her work on the 1619 Project, but all of that is compatible with her being an appropriate choice for this position.  She was vetted by the journalism faculty, recommended for a tenured position, and approved by all levels of the administration.  Only the Board of Trustees rejected the recommendation for political reasons.  Universities can't function in such an environment.

ADDENDUM:  An amusing missive from a law school Dean out west, who wrote to say he "very much enjoyed" these posts, adding "for the past few years I have thought Painter was off his rocker. I don't recall any other case of a serious scholar turning into a loud, obnoxious loon."  It is, fortunately, a sui generis case.

AUGUST 13 UPDATE:   It's been two weeks since I wrote about the former academic and professional obsessive tweeter Richard Painter.  Although I've not said a word about him since July 30, he's still managed to tweet or subtweet about me some forty times (based on a quick scroll through his Twitter feed), while on vacation no less (he tweeted about being on vacation too).  Some "greatest hits" for reader amusement:

Previously he had called me a "wimp" and a "scared kitten"; but now in this thread I'm a "bully" (just like Trump!) and he "will shut [me] down"! 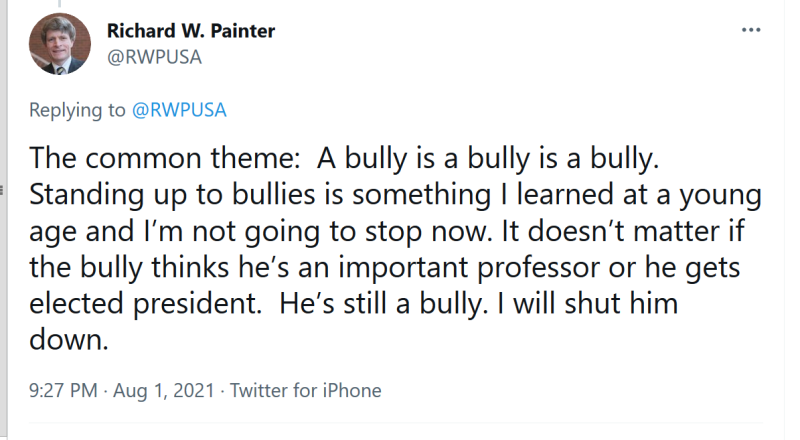 The next day he retweeted an item he first posted on July 31 (he retweets himself a lot), in which the guy who has been cyber-stalking me almost daily for more than three weeks now has the audacity to call me a "stalker": 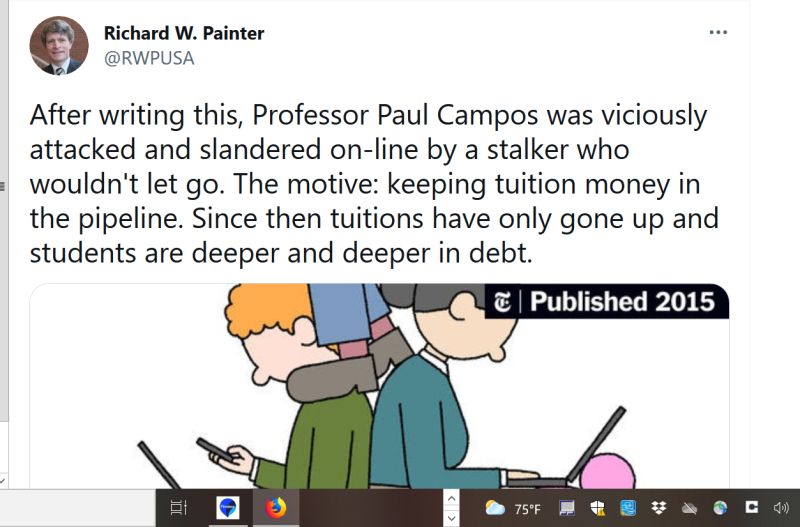 Several ironies here:  (1) I posted only once about this idiotic op-ed; (2) the op-ed was widely ridiculed because of its basic mathematical errors, which Richard didn't notice; and (3) written criticism online could be libel, but not "slander," something a law professor might be expected to know.  Richard:  for "a stalker who wouldn't let go," look in the mirror.

On August 5, he tweeted out a screenshot of my tweet about competing views about the role of racism in the murder of George Floyd, discussed in the July 30th update here.  By this point, he knew full well how he was misrepresenting the debate about Deans and academic freedom, but the great "ethics" expert didn't care.  He then retweeted it again on August 7 and August 12.

Although he's obviously deeply dishonest, it's also become clear that he's pretty stupid as well.   Since I first noted the empirical evidence about police killings, Painter has tried several times to "respond," including this from August 5:

This was so obviously feeble evidence that even his Twitter followers roasted him for this.  This fellow made the obvious point in reply (obvious to everyone except Richard): 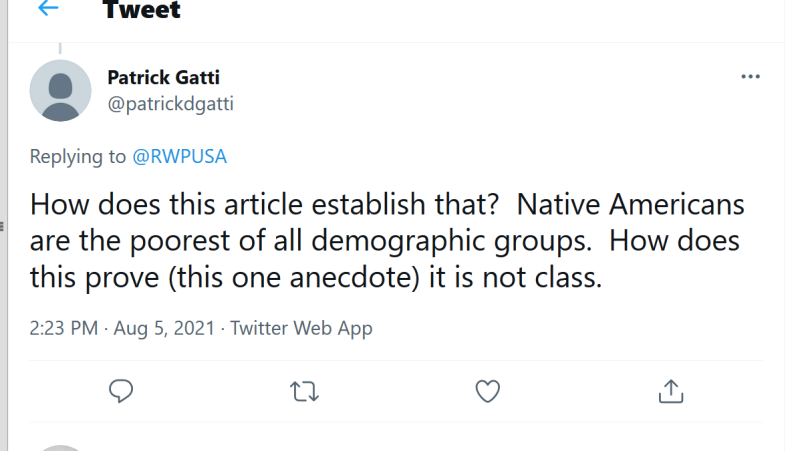 Lest readers wrongly think that Richard is unhinged only when it comes to me, here's this gem from the 60-year-old-going-on-14: 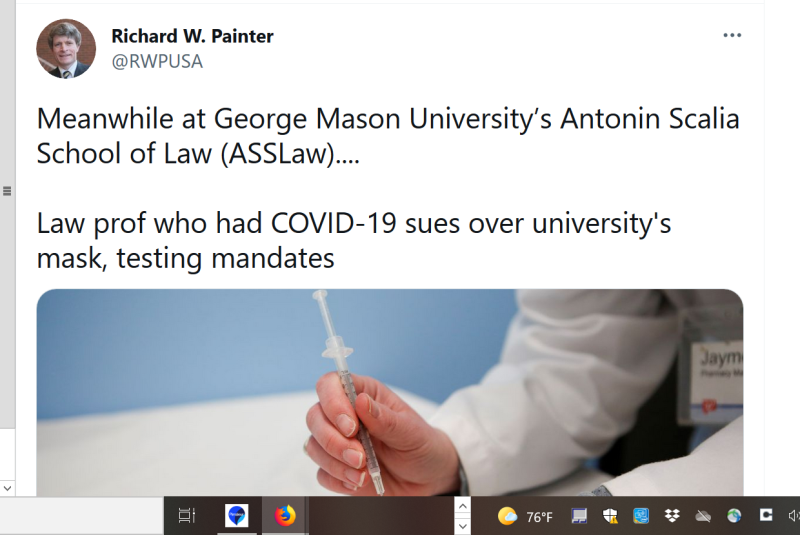 Finally, an amusing email from a former colleague of the Twitter madman:

AUGUST 15 UPDATE:  In the 48 hours, since the last update, Richard had another total meltdown, startingw with his retweeting a joke that Orin Kerr and I were making, but thinking it was serious.  That was funny, but you really couldn't make this up, from the guy who has called me, inter alia, a "wimp," "nut," "scared kitten," "narcissist," "crackpot," and on and on. 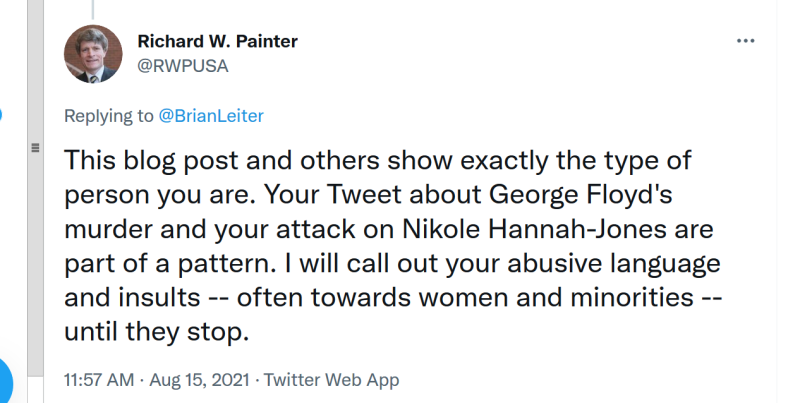 Note the complete fabrication that the criticisms are "often towards women and minorities."  (The blog post he was referring to was criticizing a white man, just like him!)  Like his Twitter role model, Trump, he has the "art of the smear" down!