NALP entry level starting salaries and employment don't predict much of anything about what will happen three to four years from now when those currently contemplating going to law school will, if they choose to attend, graduate into a quite possibly very different economy.  Nor is NALP data directionally very different from overall economic data like the employment population ratio  which is released sooner.1    And while those graduating into a stronger economy do earn more (at least for the first few years), these cohort effects fade over time, those who graduate in a recession still benefit from their educations, and attempting to time law school is a money-losing proposition because of the opportunity costs of delay.

Nevertheless, every year NALP data on last year's graduating class is released with great fanfare, including a press release.  In news that will surprise no one who has tracked the rise in the overall employment population ratio, it turns out that the class of 2017 had better employment outcomes than other classes since the recession. Or as NALP sexes it up for journalists, "Class of 2017 Notched Best Employment Outcomes Since Recession." (88.6% employed 9 months after graduation for the class for 2017, compared with 87.5% for the Class of 2016).

But, NALP unhelpfully informs us, there's a catch--the total number of law jobs for law graduates was lower even though the employment rate was higher. 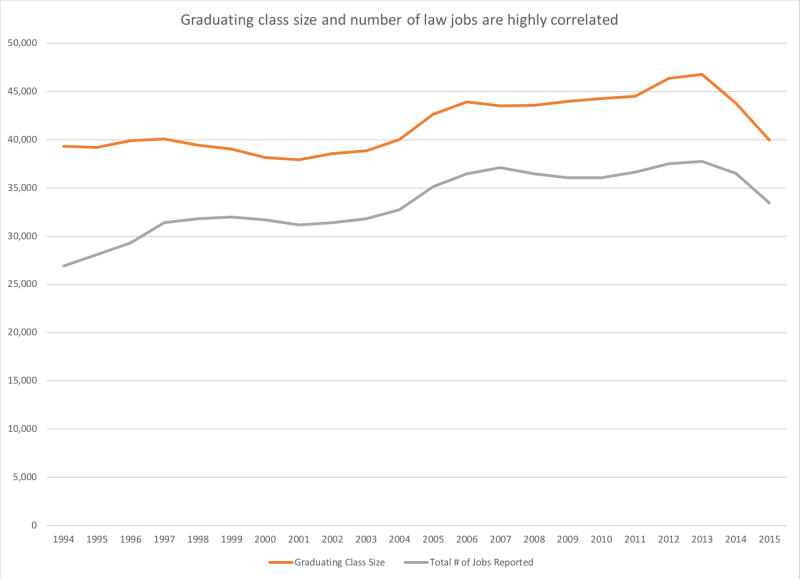 The employment market for educated workers is large and the number of law graduates is small relative to this market.  Law schools are too small to move the market much on the supply side by admitting more or fewer students.  Just as the typical investor could sell all of his or her shares of Apple without moving the market for shares of Apple (much less the S&P 500), the typical law school can admit as many or as few students as it wants without changing the overall percent of law graduates who will find jobs.  (However, there’s some evidence that at the national level, the share of recent law graduates working as lawyers varies inversely with class size).

The usefulness of NALP data is questionable (at least for many of the uses to which it is often put), but NALP could help by limiting its reporting to employment rates and starting salaries.  Discussing changes in the absolute number of law graduates with jobs is simply a confusing ways of telling people that fewer people entered law school 4 years ago than 5 or 6 years ago.

NALP should also contextualize its employment ratios by comparing them to the overall U.S. employment population ratio during the same time period (i.e, March of 2018), which was 60 percent overall, and and 79 percent for those age 25-54 according to BLS and the OECD, compared to 89 percent for recent law graduates, according to NALP.

1 (Similarities are greatest when one restricts it to those who are both young and well-educated using CPS data.

UPDATE: 8/3/2018  The correlations and r-squared were originally reported based on levels rather than % change from previous year. The numbers have been updated to reflect a model based on differencing (% change from prior year), which brings the explanatory power from 1999 forward down from 96 percent to 82 percent.