A recent report by a Harvard law school alumnus, Pete Davis, points out that law schools like Harvard serve the interests of wealthy elites by training primarily future corporate lawyers. (See also here). This is consistent with the available evidence on graduates’ employment, notwithstanding widely publicized—and dubious—claims of law schools being liberal or left-leaning.

Whether or not this is a problem, and whether schools like Harvard should try to do a better job of training future business lawyers or try to steer their students away from business law, is a matter for debate. Davis appears to believe that business lawyers are incapable of serving important collective interests of society—or at least do not do as good of a job as public sector lawyers. According to Davis, law schools therefore have an obligation to discourage students from pursuing careers in business law.

My view is that the path toward resuscitating the public sector will entail convincing the American people to collectively share the burdens of civilization by voting for higher taxes and higher pay for public servants. Until public servants are paid fairly, no one but the very wealthy should feel any obligation to work in the public sector or encourage their students to do so.

I would argue that business lawyers facilitate incredibly important functions in the service of society. Business lawyers help businesses raise the capital they need so that they can serve the basic needs of hundreds of millions or even billions of people. Lawyers also help firms mitigate risks, comply with government regulations and organize tens or even hundreds of thousands employees and suppliers to work together toward a common goal. That is remarkable, and the economic progress that has resulted clearly is in the public interest.

Lawyers simultaneously help investors who need to save for important life goals like buying a home, paying for their children’s’ education, or retiring without depending on relatives for assistance. By helping create financial instruments, lawyers make funding for these life goals more secure, and not solely beholden to political winds that can lead to cuts to public pensions, housing, or education.

The public sector can serve an important role—combatting pollution and other externalities, limiting potential abuses and inefficiencies from information asymmetries, softening the ravages of poverty, reducing the extreme differences in power and resources that can result from market processes and become self-perpetuating, and fostering public investment. And the public sector may well be under-resourced and under-staffed in the United States, which has one of the proportionately smallest public sectors of any developed economy (especially when one excludes the military).

Harvard cannot magically convince the U.S. electorate that a public defender who helps lighten punishment for petty criminals from poor backgrounds deserves to be paid as much as a corporate lawyer who helps arrange multibillion-dollar loans so that businesses that provide life saving medicines can expand their operations.

Indeed, the legal profession struggles even to convince the electorate that lawyers who work for financial regulators and try to protect investors deserve to be paid something roughly equivalent to their counterparts in the private sector that they seek to regulate, or that federal judges should be compensated roughly in line with the lawyers who argue cases before them.

Nor can law schools do much directly to reduce the gap in pay between corporate lawyers and those in the public sector. Even if tuition were free, this would leave a massive gap in lifetime earnings, working conditions, and future exit options that would still encourage many to pursue careers in the private sector. Indeed, the gap in rewards between the public and private sectors is growing. Rates for banking, corporate, and commercial lawyers have grown far more quickly than rates for lawyers in other practice areas over the last several decades. (More recent data shows this trend continuing). 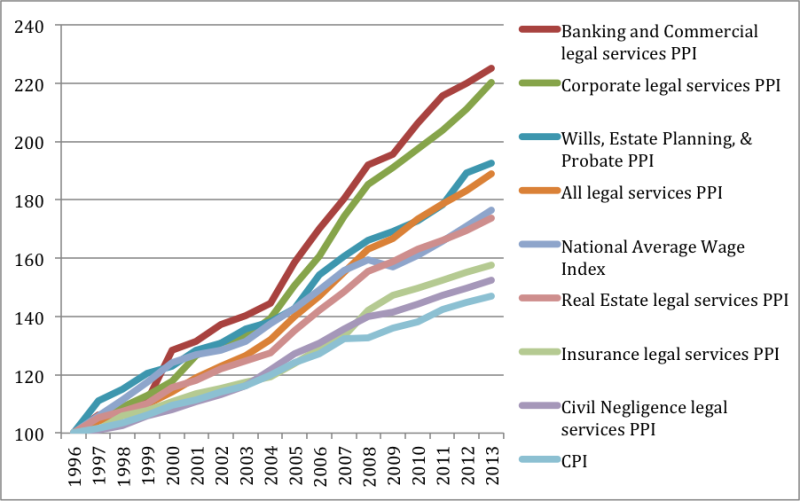 Corporate lawyers’ pay may seem high to some, but it is no higher than—and no less deserved than—the pay of the leading financiers and businesses people with whom they work.

Public pensions may provide a partial offset for low public sector pay but even public pensions are increasingly at risk for state and local government employees. Public servants believed in promises that taxpayers are increasingly unwilling to honor. Similarly, the federal government seems poised to renege on its promise to provide a compensation supplement for public service in the form of federal student loan forgiveness.  (One typically does not say "thank you for your service" by cutting someone's compensation after they've done the work).

Public service will never be a top career choice for a large enough proportion of the most energetic, hardest working and most capable graduates as long as choosing a career in public service entails a large financial sacrifice.

This is rarely a choice between a life of luxury and a life of modest virtue. For most individuals who are not independently wealthy, the choice between the public sector and private sector is a choice about the quality of housing, healthcare, transit, education, air, water, and physical security that they and their loved ones will enjoy and the quality (and length) of life they can expect. No speeches by faculty or university administrators about obligation, civic duty, and service will change this harsh reality. Nor will a very large proportion of people put the interests of an amorphous and indifferent “public” ahead of the tangible needs of their own families.

Elite universities’ resources are far more limited than is often assumed. Household networth in the United States is close to $100 trillion.  The endowment of all of the colleges and universities in the United States—which support hundreds of thousands of employees in the service of millions of students and other stakeholders—is between $500 billion and $1 trillion—i.e., less than 1 percent of household networth.

Most universities are part of the underfunded public sector. Many law schools already have far more full-time tenure track faculty in public law than private law, even though the career opportunities for their students are far better in the private sector. Universities similarly tend to be relatively shorthanded in high-demand fields like computer science, a few engineering specialties (see here), accounting, and economics. This may not be a matter of ideology or “virtue” so much as a concession to budgetary pressures.[1] Universities cannot compete with pay in the private sector.

Indeed, wealthy individuals could single-handedly contribute more than entire universities. The total networth of the Forbes 400—the 400 richest individual people—is $2.7 trillion, roughly four times the aggregate combined endowments of the thousands of colleges and universities in the United States. Bill Gates and his family foundation control more wealth than the endowments of Harvard, Yale, and Princeton combined. Even Bill Gates’ lakefront mansion (one of his multiple residences) is worth 15 times the typical endowment of colleges or universities.[2]

Mr. Gates—through his foundation, which funds think tanks, media organizations, and ostensibly “grass roots” advocacy groups—opposes expansion of public funding for education. Several of his grantees have led the charge to scale back federal student loan forgiveness. Others have sought to eviscerate teachers’ unions. In a recent interview, Mr. Gates—who named his residential compound after the summer palace of an emperor who ruled over a quarter of the world’s population— reluctantly conceded that perhaps he and his businesses should pay a bit more in taxes—but only after comparing progressive taxation to what goes on in “North Korea.”[3]

The American people—through the federal government’s power to tax—can afford to pay a fair price for the talent and energy of skilled labor. Educators should think twice before pressuring their students to concede to work on disadvantageous terms.

The sacrifices of those who are public-service oriented may serve as little more than an excuse to enable the wealthiest members of our society to pay less in taxes than they can and—in the views of those who see value in the public sector and believe it should be served by a talented workforce—should.

[1] To the extent that some public law faculty may resist hiring qualified tenure-track private law faculty for parochial or ideological reasons (such as furthering “social justice”), these faculty member are inappropriately substituting their own values for the best interest and autonomy of their students. Moreover, they are leaving the relatively small proportion of their students who are committed progressive activist woefully under-prepared to navigate the real world.

It is just as important for those who wish to fight for a more egalitarian society as for those who prefer the status quo to understand taxation, corporate finance, corporate governance, financial regulation, limited liability, civil procedure, capital structures, administrative law, bankruptcy and labor and employment law. (Just ask presidential hopeful, progressive firebrand, and bankruptcy and commercial law scholar, Senator Elizabeth Warren).

[2] There are close to 5,000 post-secondary institutions in the United States, most with very small endowments. The median endowment was $7.9 million and the mean was $10 million according to a 2014 report by ACE. Mr. Gates’s lakefront compound, “Xanadu 2.0,“ was reportedly worth around $124 million in 2014. More recent estimates place the mansion’s value between $150 and $200 million.