Nevertheless, some critics of law school, concerned by the high cost, have suggested going back to the "good old days" of legal apprenticeships, or using technology to bring down costs.  The data does not support apprenticeships or less highly regulated (and less expensive) online or correspondence versions of law school as viable alternatives to ABA-approved law schools.

Several major legal markets (including New York and California) permit prospective lawyers to sit for the bar exam after 4 years of apprenticeship under a licensed lawyer (or 4 years combined law school and apprenticeship).  Very few people still try this approach. But for those who do, the bar passage rates are abysmal.

California permits online and correspondence schools, as well as other low cost and more lightly regulated models.  Completion rates are low and bar passage rates are once again extremely low.   The results are substantially the same within race (i.e., the results are not driven by racial differences in those who select different types of preparation for the bar). 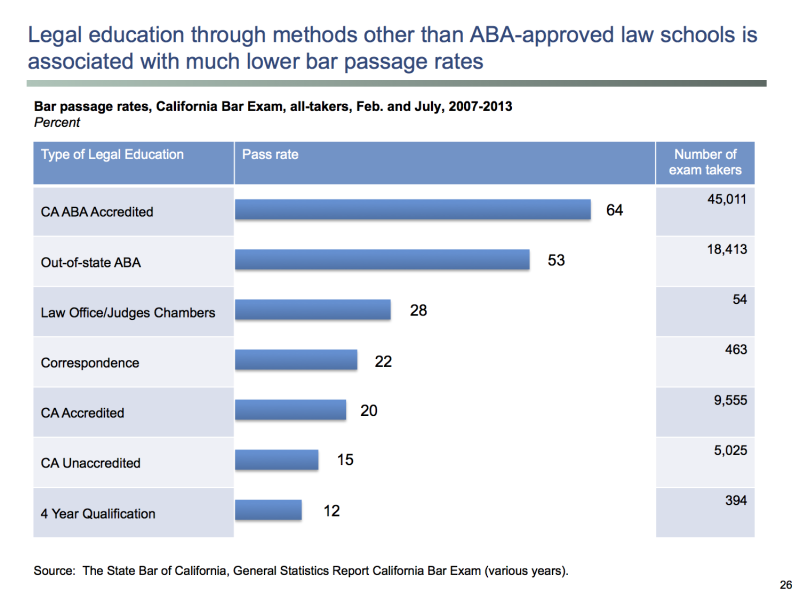 In New York, the 4-year qualification (apprenticeship) approach has similarly produced disappointing results.  Only in small, remote markets which struggle to attract enough working age people, such as Vermont, are there any signs of even modest success for apprenticeships.  It seems doubtful that this model could be replicated in competitive legal markets like New York of California.

Several readers have asked good questions in response to this post, specifically:

1) How should the lower tuition cost of online programs or non-ABA approved law schools be factored into the analysis to allow for tradeoffs between cost and quality? and

Cost should be taken into account, but tuition may be a lower cost than the opportunity cost of forgoing a higher quality education for one of lower quality.  Ideally, one would compare similar students who either pursued an ABA-approved degree, an online degree, or an apprenticeship and compare their subsequent lifetime earnings regardless of whether they completed their program of study or passed the bar exam. The present value of the difference in lifetime earnings would then be compared to the present value of the difference in tuition.  The average law degree costs around $100,000 in tuition (net of scholarships) and yields an average benefit of $1,000,000.  Costs may be higher toward the low end, and the benefits are likely lower as well, but the net present value is still likely in the hundreds of thousands of dollars.  It is unclear if programs of study with very low completion rates--remember, many people drop out of online programs or non-ABA approved programs or apprenticeships even before they sit for the bar--could provide more value than this in expectation on average.

It is possible, and indeed likely, that there are differences between the various groups in initial capabilities. The data that is available from California provides a breakdown by race, but not more detailed information such as standardized test scores or parental SES or indicators of motivation.  Differences by race do not explain the differences in outcomes, but of course there are differences in important characteristics within race.

However, I think the data is sufficient to place the burden of proof on those advocating apprenticeships or online education. Someone who can line up an apprenticeship might be better connected than someone who cannot—without data we do not know. Some low ranked ABA-approved law schools serve students with low standardized test scores and who may come from less educated families. It is unclear how different these students are from those who pursue other paths.

To take the example of California, there are quite a few ABA-approved law schools with students whose observable credentials (GPA / LSAT) are not particularly high but which have much higher pass rates than online programs or apprenticeships.

If there are other differences that explain the difference in outcomes besides educational quality, I think it’s up to advocates of online programs and apprenticeships to demonstrate this.