Higher Education could soon become substantially more expensive to finance.  The federal government may reduce how much it lends to its most profitable borrowers—graduate and professional students—undermining the financial strength of the federal student lending program and reducing competition in the market for student loans.  Borrowers could lose an important safety net that limits federal student loan repayments if student incomes are lower than expected.  Public sector and non-profit employers could struggle to recruit and retain educated workers as a wage subsidy is eliminated and public-sector compensation becomes even less competitive with the private sector.  For-profit lenders and dodgy for-profit online education programs could see huge financial benefits.

A bill that has emerged from the House education committee and is moving forward with a full vote (summaries available here and here) would:

Capping Graduate PLUS loans hurts taxpayers.  A recent analysis by the Department of Education and the Government Accountability Office found that Graduate PLUS loans are the most profitable in the Federal government’s portfolio, even after accounting for the costs of debt forgiveness.

Figure 13 of the study shows that PLUS loans and unsubsidized Stafford loans make money for the government, after accounting for the cost of income driven repayment.[1]

PLUS loans charge the highest interest rates in the government’s portfolio—often more than private lenders would charge similar borrowers.  However, federal student loans come with a safety net that caps repayments as a fraction of a borrower’s income if the borrower’s income remains low relative to debt service payments for an extended period of time and eventually forgives the remaining balance.  Risk averse borrowers may find this safety net attractive—public and private student loans are difficult to discharge in bankruptcy.

The Income Based Repayment safety net enables the federal student loan program to compete with private lenders, reducing borrowing costs even for those who opt for private sector loans.  The government’s profits from graduate and professional student borrowers help defray the costs of subsidizing other borrowers more heavily.

Figure 5 of the GAO study shows Graduate Plus Loans in Income-Driven Repayment have the lowest subsidy rate of any loan program—that is, graduate and professional students repay more of their loans. 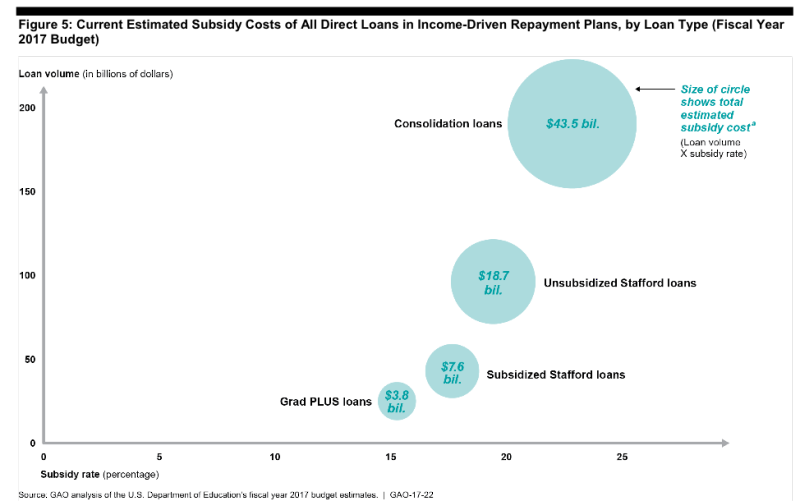 The GAO/DOE study has several limitations that overstate the costs and understate the benefits of these programs.[2]  If Graduate PLUS loans are curtailed, the federal student loan program will become less profitable and therefore more politically vulnerable to future cuts.  The bill also threatens to undermine the performance of federal student loans by opening the floodgates to funding of low quality for-profit online programs.

Private lending is more volatile than federal lending.  Private lending has an unfortunate tendency to become unavailable when it is most needed.  During the recession of 2008-2009, private student loan origination volumes plummeted even as demand for education surged.  Capping loans to graduate students could lock prospective students from poor and middle-class families out of graduate and professional school if they have the misfortune of graduating college during a recessionary credit crunch—precisely when the opportunity cost of pursuing more education is lowest because the labor market is weakest.

Limiting debt forgiveness could make federal student loans more “profitable” as a pure lending program but could have much larger costs to taxpayers if eliminating this safety net reduces investment in human capital.

The U.S. is already dramatically underinvesting in and overtaxing higher education, as demonstrated by the high public and private returns to education.  The public returns to investment in higher education are greater than the expected returns to the stock market or bond market because we have a shortage of high skilled, highly educated labor.  The proposed policy changes are bad for students, and they also threaten to undermine the long run economic growth and fiscal health of the United States.

AccessLex Institute has assembled a toolkit to help concerned citizens contact their members of Congress to try to improve the higher education finance bill.

Extremely powerful and well-funded forces are pushing to make federal student loans more expensive and less widely available.  These include foundations with strong ties to private student lenders and purveyors of online education of relatively low cost but dubious quality.  Collectively, they control billions of dollars in assets.

For the past five years, they have generously funded think tanks, advocacy groups, and media organizations across the political spectrum to push for de facto incremental student loan privatization.[3]  The reports that have resulted have too often been alarmist in tone and flawed in substance.  Some contain mathematical errors.  Others depend on doubtful assumptions, an overly narrow focus, or questionable methodological choices.

For example, several think tank and private lender studies assume that if not for Income Based Repayment, every student borrower would repay their loans in full and on time with zero risk of default or loss.  This is obviously not realistic--some defaults and losses are inevitable regardless of loan forgiveness.  This assumption exaggerates the cost of forgiveness programs. Some studies misuse discount rates and inappropriately mix present and future values to exaggerate the costs of forgiveness.  The assumptions in these studies imply that the cost to the government of a loan which is partially repaid and partially forgiven would be higher than the cost of grant which is never repaid at all--a patently absurd assumption.  For example New America's loan forgiveness calculator, created by Jason Delisle (now at the American Enterprise Institute) and Alex Holt misleadingly suggests that partially forgiving a $10,000 graduate plus loan would cost the government $14,300--even after the borrower made payments totaling $11,200 over 20 years.  New America reaches this dramatic--and misleading--result by presenting loans in present value terms--so they appear small--while presenting forgiveness in future value terms--so that the costs of forgiveness appear large.  The New America calculator was used as a basis for many think tank studies and media reports criticizing IBR.

In an article promoting their work, Delisle and Holt specifically claimed that it would cost the government a "shocking $158,888" to lend a law student doing public interest work $146,000, and forgive the remaining debt after the student made $55,000 in payments [NAF excel sheet here].  It is shocking indeed, since it's mathematically impossible.  Delisle and Holt inappropriately grew the debt at 7.5 percent, but then discounted the debt forgiveness back to present value at a much lower 2.5 percent discount rate to exaggerate the magnitude of the debt forgiveness. (A simpler (albeit still flawed) approach--discounting the payments made by the borrower back to present value at Delisle's chosen discount rate of 2.5 percent and then subtracting this sum from the $146,000 suggests a cost of around $98,000).

As a professor of corporate finance who has seen all manner of mistakes from the uninitiated, I still cannot understand how Delisle and Holt could have made these errors.  I won't comment on Delisle or Holt's credibility further, except to cite Holt's shameless attempt to spin the aforementioned GAO and DOE study which showed that Holt and Delisle were wrong and that student loans to graduate students are profitable for the government.  Holt misrepresents the report as a vindication of his views, trumpets his error-ridden excel model, and impugns the integrity of those who disagree with him.  Rather than acknowledge his own mistakes, Holt slanders public servants at the Department of Education as "either 'extremely deceitful' or 'extremely incompetent'” and invites Congress to hold hearings investigating them.

Nevertheless, Holt, Delisle and fellow travelers' investments in lobbying may be about to pay huge dividends for their financial backers—to the detriment of millions of students, and hundreds of millions of Americans who depend on the long term fiscal health of the United States to support Social Security and Medicare.

Those who are concerned should take action before it is too late.  (See also here).

[2] The DOE used an averaging approach to estimate income growth that likely understates incomes and income growth for professional degree holders, did not account for inflation, and assumed that no borrowers who enter IBR eventually drop out and enter ordinary repayment.  Estimates for costs of PSLF overlook transitions between public and private sector work, and movement in and out of the work force, which delay eligibility for debt forgiveness. None of the studies considered the benefits of these programs in terms of driving higher educational attainment, and therefore higher tax revenues and lower costs for social insurance programs.  (35 to 40 cents of every extra dollar earned because of higher education is collected the federal government as income and payroll taxes).  These limitations all exaggerate the costs of the programs.  While participation in IDR may grow, the cost per participant is likely substantially overstated.

Privatization policies are often misrepresented as “progressive,” ostensibly because student borrowers tend to have higher than average incomes compared to members of the population with less education.  But there is no logical or empirical connection between cutting federal student loans and helping the poor.  The distributive effects of student loan privatization transfer value from student borrowers—not all of whom have high income or wealth—to private lenders’ investors, senior managers, and major contractors, who often tend to be relatively well-off.  Income, wealth, or consumption taxes are more effective instruments for progressive policy than cuts to spending because taxes can be specifically designed to affect individuals in proportion to their income, wealth, or consumption rather than based on broad categorical averages.  Even if tax rates were flat, billionaires would contribute a much larger share of tax revenues than individuals who were middle class or poor.

UPDATE: This post was updated on 3/31/2018 to include a more detailed discussion of substantive problems with think tank reports critical of IBR.