Are law degrees as valuable to minorities? (Michael Simkovic)

"Individuals who complete law school typically receive a large boost to their earnings compared to what they would likely have earned with a terminal bachelor’s degree.  (Simkovic & McIntyre, 2014)  The law earnings premium has exceeded the cost of law school by a wide margin, even toward the bottom of the earnings distribution, and even for graduates who enter the labor force during a recession or with an unusually large cohort of fellow law graduates. (McIntyre & Simkovic, 2017)

But is the value of a law degree predictably different depending on one’s race or ethnicity? Estimates by race or ethnicity could help prospective law students and law schools better predict variability in the potential financial benefits of law school, and could help inform outreach, admissions, academic support, and financial aid policies.

This article investigates differences in the law earnings premium by race and ethnicity.  Compared to bachelor’s degree holders, a higher proportion of law graduates are white.

Studies of the returns to education at the college level or below have come to different conclusions about differences in benefits by race.  Several studies have found lower earnings among black and Hispanic law graduates compared to non-Hispanic whites.  The reasons for these differences are not fully understood and are hotly debated. . . .

Whatever the cause, among those with law degrees, there are differences in average earnings between different race or ethnic groups. However, the same pattern is present among bachelor’s degree holders. [Prior to this study it was] unknown whether there are similar differences in earnings premiums (i.e., the boost to earnings from the law degree), measured either on a percentage or dollar basis. . . .

[T]he National Longitudinal Bar Passage Study found that long-term bar passage rates were substantially lower for minorities than for whites.[1]  Thus a study of all law degree holders including those who did not pass a bar examination [such as this one using Census data] may find larger racial gaps in earnings [than previous studies that look only at bar-passers].

We find evidence that white graduates have a somewhat higher percentage boost in earnings compared to minorities, but when translated into dollar terms the law earnings premium is substantially higher for white graduates than for minorities.  At the median and including law graduates who are not practicing law, the annual boost to earnings from a law degree is approximately $41,000 for whites, $34,000 for Asians, $33,000 for blacks, and $28,000 for Hispanics.  The law earnings premium is also higher for whites than for minorities at the 75th percentile, the 25th percentile and the mean, and for samples that are exclusively male or female. . . . 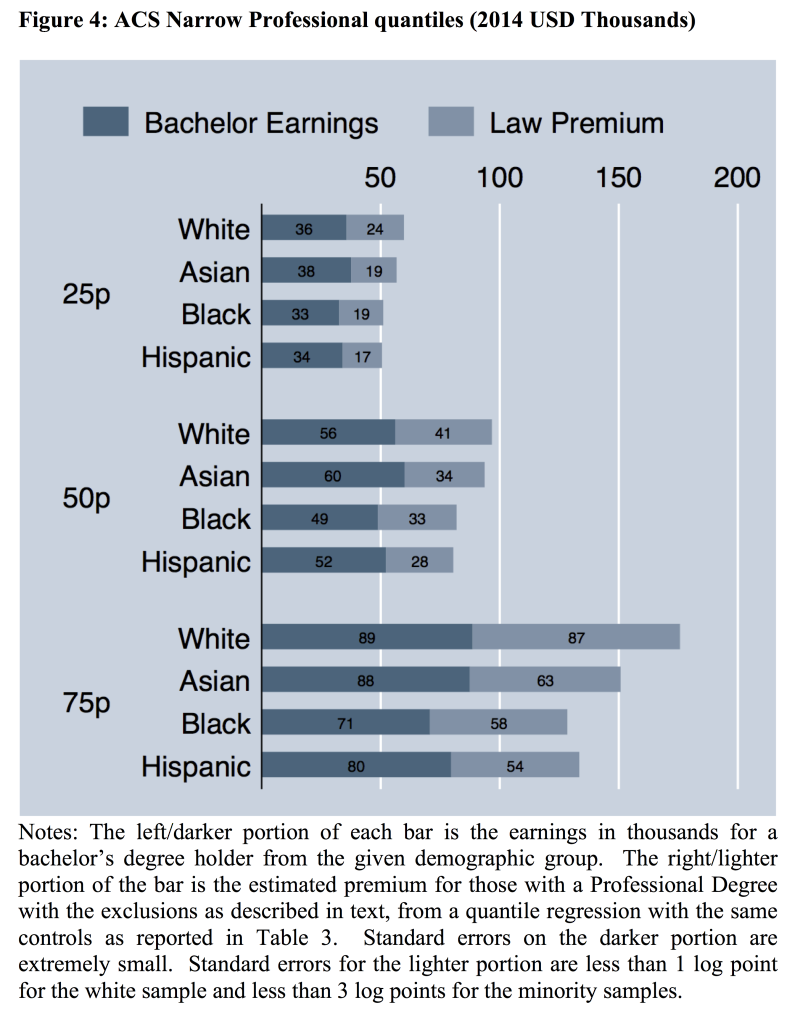 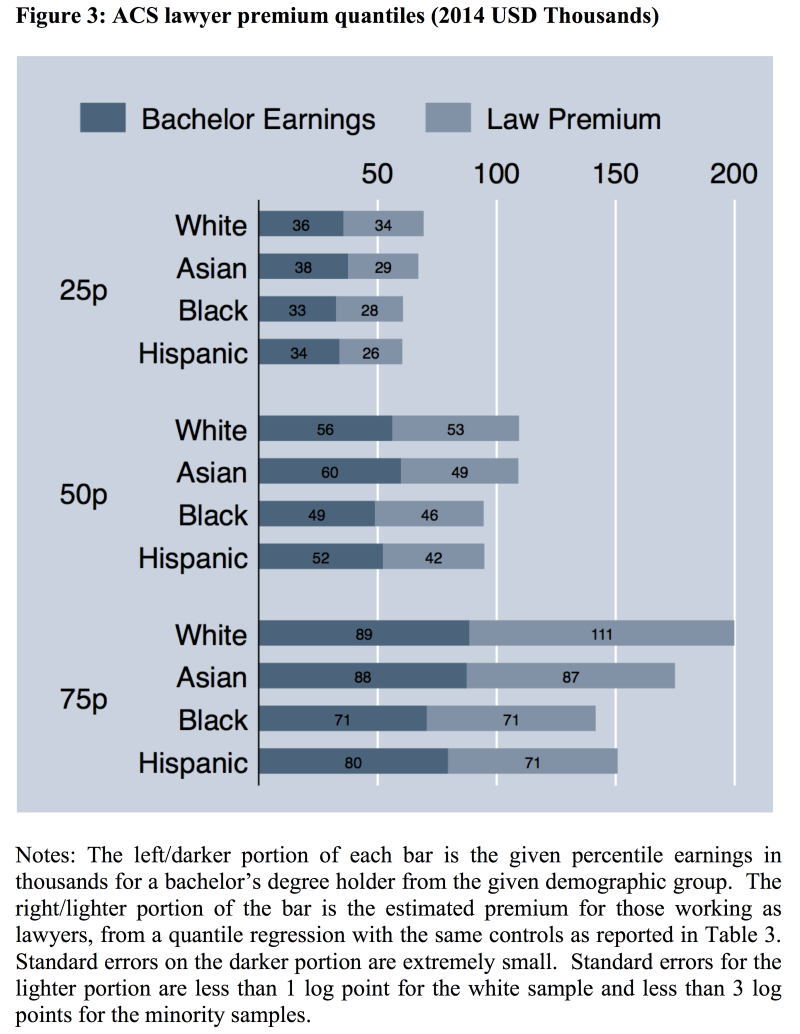 It is likely that at the median and even 25th percentile, law students of all races typically derive greater financial benefits from their law degrees compared to a terminal bachelor’s than the costs of those law degrees. However, minority students’ predictably lower earnings premiums indicate that they are at greater risk than other students . . . 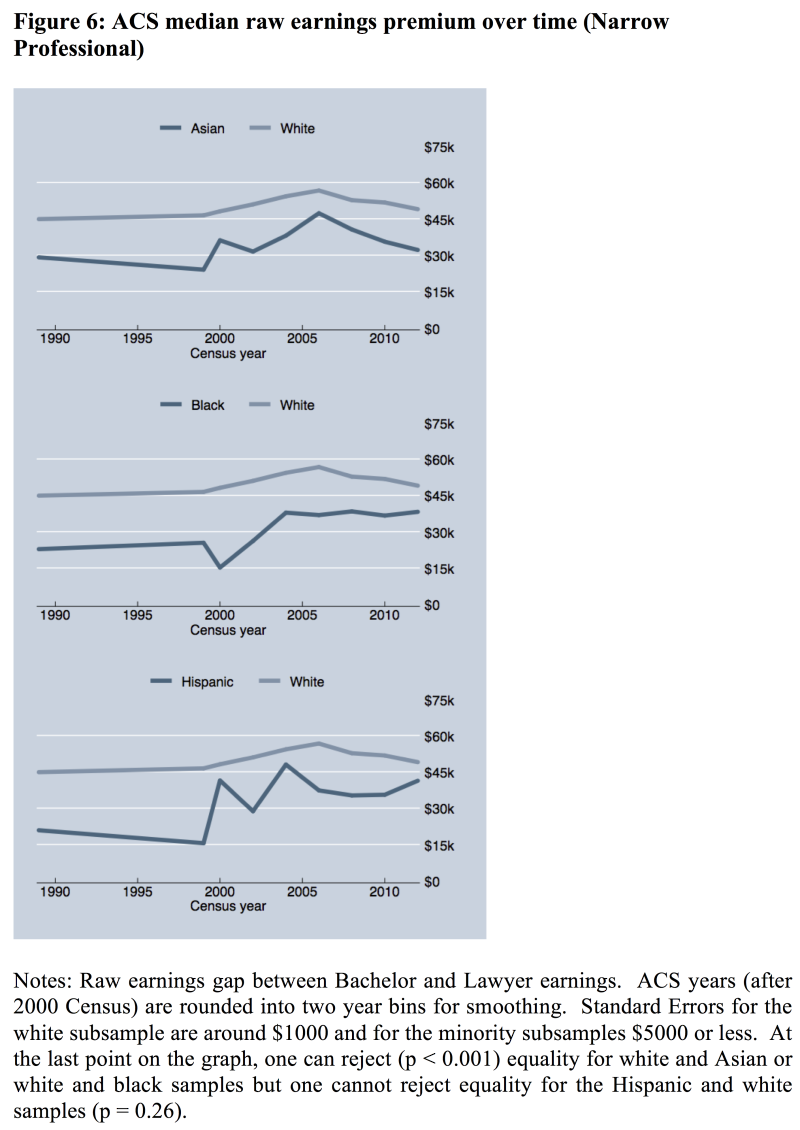 A higher proportion of blacks and Hispanics than whites graduated from the bottom quartile of law schools.  However, a higher proportion of Asians than whites graduated from the top half of law schools.  Since all three minority groups receive less benefit from their law degrees than whites, the reasons for racial differences in law earnings premiums are not [easy to explain exclusively in terms of differences in legal education prestige or quality]. . . . Some other possible reasons which are difficult to test empirically include differences in complementary social and family connections, different preferences for types of legal work or types of employers, racial discrimination by employers or clients, or differences in earnings ability and productivity.  . . .  "