The following is a response from Professor Benjamin H. Barton to critiques and questions about his use of IRS data to estimate solo practitioner incomes. It has not been edited or altered from the form in which Professor Barton submitted it.

IRS and Census Data Not that Far Apart Upon Closer Inspection

On July 25th Professor Stephen Diamond criticized my use of IRS income statistics to discuss the earnings of solo practitioners on his blog.  I responded to Professor Diamond in the comments.  On July 26, 2016 Professor Michael Simkovic published a number of critiques here.  Two days later Professor Simkovic followed up with a second post asking me a series of questions and challenging me to respond to both of his posts.  Here I accept Professor Simkovic’s invitation.

Below I explain more about the IRS data and how I use it, but I will not bury the lede.  The data that Professors Simkovic and Diamond use to criticize my work, ACS data for lawyers who are in the category of “self-employed, not incorporated,” is not appropriate data for defining the earnings of solo practitioners.  That Census category likely includes two very different types of self-employed lawyers – solo practitioners (the lowest paid lawyers in private practice) and law firm partners (the highest paid lawyers in private practice).  The Census Department does not make it easy to figure out exactly which lawyers are counted in the category of “self-employed, not incorporated,” but combining this definition with this one and looking at the ACS form itself it seems pretty clear that partners in law firms are included in this category.[i]

Because the ACS data includes an indeterminate number of partners and solos, the average earnings in that category ($165-200,000) are a misleading proxy for the earnings of American solo practitioners.  If there was a data category of “professional baseball players” that included minor league (low paid) and major league (highly paid) baseball players, and there was no way to tell how many of each were in the sample, you could not use the average earnings of “all professional baseball players” as a proxy for minor league salaries, since some members of the sample earn much, much more than other members of the sample.

The ACS data is inappropriate, but is the IRS data better?  I use the IRS data in my book, Glass Half Full – The Decline and Rebirth of the Legal Profession (Oxford 2015) and in later work to talk about several trends in the market for legal services.  Here is an updated version of a chart I first created for the book: 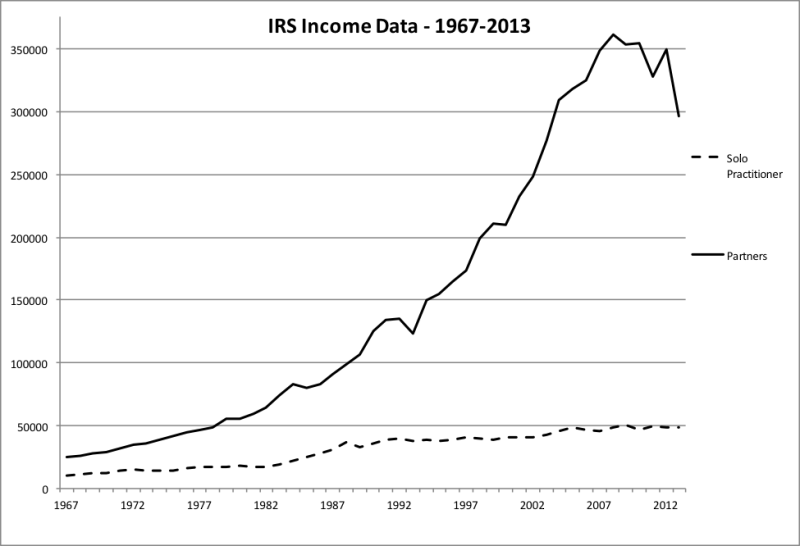 The chart shows the earnings from two different IRS categories, partnerships and sole proprietorships.  In the book I use the solid line, the IRS partnership data, as a rough proxy for lawyers who mostly represent corporations, large businesses, or wealthy individuals (corporate lawyers for short).  I use the bottom line, sole proprietorships, as a proxy for solo practitioners or what I call main street lawyers.

2) The gap between these two groups of lawyers has grown a lot over the years.  In 1967, the first year both data sets were collected, the average partner earned about twice as much as the average solo practitioner.  By 2008 (the year the gap was at its greatest) partners earned 7.5 times as much as a solo practitioner.  Even after the recent collapse in partner earnings, the gap is large and partners earn roughly 6 times what solo practitioners earn.  This supports John Heinz and Robert Nelson’s two famous studies (Chicago Lawyers and Urban Lawyers) that found the private practice of law separating out into two almost wholly separate professions: lawyers for corporations (who make a very good living) and lawyers for regular people (who are struggling).  It also looks like the bimodal salary distribution of NALP’s placement data.

4) Solo practitioners earn less than you would think.

There are several caveats with the data, and unless I am under a word count I typically cover these caveats when discussing the data.  Neither category contains lawyers working in incorporated business entities, which may depress earnings in both.  The partnership category also contains small partnerships with few or no employees that look a lot more like solo practices than corporate law firms.  This means the partnership data does not include some Big Law lawyers who work in professional corporations and does include some small partnerships, so the average earnings in this category may run low.  Likewise, the solo practitioner data includes people winding their practices up or just starting, so those numbers are likely depressed as well.

Both of these data sets are for the NAICS code 5411 “Legal Services,” which does include some non-lawyers.  I think a comparison of the number of returns and other lawyer counts suggests that the IRS sample comes primarily from lawyers.[ii]  If you think it is misleading to use the word “lawyers” with these data, replace the word “lawyers” below and above with the words “providers of NCAIS 5411 category legal services.”  It strikes me as very likely that the market for legal services is a good proxy for the market for lawyers, but you may disagree.

I realize you may disagree with all of these conclusions and that you may think no one should consider these data at all.  I disagree.  The IRS data on lawyer earnings is the longest running data set I have been able to find and thus the best dataset for a discussion of long term trends.  It is also the only dataset I have been able to find that separates lawyer earnings into solo practitioners and law firm partners, a very helpful dichotomy for considering trends in the private practice of law.  The data also jibe with several other sources, including the After the J.D. Study, various state bar salary surveys, the NALP data, and the Heinz studies listed above.  Professor Gillian Hadfield’s comment on Professor Diamond’s blog uses the 2012 Economic Census to show that $50,000 is also a reasonable estimate using those data.

Is it possible that the IRS data undersells the earnings of solo practitioners?  Yes, for the reasons I state above and for some of the reasons that you and Professor Diamond point out.  If you think that makes the ~$49,000 figure too low, the IRS also publishes data that include only legal sole proprietorships with net income.  The most recent After the JD data suggest that there are a significant number of solo practices that make no income, but if you prefer to leave them out of the average as a response to any other downward bias, the new average is still $64,422, much closer to $50,000 than $100,000 or $160-200k.

Professor Diamond uses the ACS data to suggest that American solo practitioners average earnings are between $160,000 and $200,000 a year.  I am a data-oriented person and am always very careful to check my opinions against any available data.  That said, when the data looks terribly out of whack I tend to proceed cautiously.  160-200k immediately struck me as too high.  If solo practitioners earned that much the NALP data, the After the JD data, and the shape of the market would all look radically different.  If solo practitioners earned substantially more than the BLS estimate for lawyer earnings we would see a flood of lawyers leaving salaried jobs and heading into solo practice and we would see fewer licensed lawyers working in lower paid jobs that do not require a JD.

It seems that you agree that the ACS data cannot be used as-is, because in your first post you estimate that “solo practitioner average (mean) annual earnings are likely closer to $100,000.”  I do not know how or why you decided to discount the ACS range by 40-50% or why you back off of the ACS data which you have defended so vociferously elsewhere.  Professor Diamond seems to disagree with you.  Elsewhere in your post you also argue that “Census data underestimates incomes for highly educated, high income workers.”  From this statement I would have guessed that you would think that the range of 160k-200k is actually low, not too high.

In fact, if the IRS data were lumped together in the same manner that the Census data is (with partners and solo practitioners counted together in the same category), the IRS estimates that solo practitioners/law firm partners earned around $133,000 in 2013.  If you use only the solo practices that had net income the average for the combined category rises to approximately $155,000.  Both of these figures are slightly lower than the ACS data you and Professor Diamond rely upon, but it is close enough to make me comfortable that the data are not as different as they appear at first blush and makes me more confident in the IRS data, not less.

I understand that you and Professor Diamond may disagree with some or all of what I have written.  That is fine.  One of the challenges of writing in this area is that there are multiple, and in spots conflicting, datasets.  For example, outside of the ABA’s hard count of the number of Americans licensed to practice of law (many of whom work in jobs that do not require a law license or do not work at all), we really do not have a good count of how many people work full-time as lawyers in the United States (BLS, Census, and the ABA surveys all give differing answers).  Since we do not know exactly how many working lawyers there are, we naturally also struggle to figure out exactly what they earn (Census, BLS, ABA estimates, and IRS counts diverge).  Further, the data is not always sorted into useful subcategories (like solo practitioner or law firm partner).  Under these circumstances it is only natural that reasonable people could disagree.  Thank you for the interest in my work and for the opportunity to respond here to your thoughts.

[i] The census website entitled “Class of Worker” has the following, circular and unhelpful definition of self-employed, not incorporated business workers:  “This class includes people who worked for profit or fees in their own unincorporated business, profession, or trade, or who operated a farm. This class is often tabulated together with the following group, unpaid family workers.”  The site does, however, send you to another site for further clarification.  On this site we get closer to pay dirt.  The site defines self-employed in own unincorporated business as individuals who own an unincorporated business and “work for profit or fees in the person's own business, shop, office, etc. It does not include managers or other executives hired to run a business, salespersons on commission, or corporate officers. This category includes sole proprietorships and partnerships, but the company cannot be incorporated.”  (Emphasis added).

[ii] For example, the most recent ABA count of solo practitioners is relatively close to the IRS count, so that supports the supposition that the IRS dataset contains mostly lawyers.  You can determine the ABA count for solo practitioners by combining the ABA lawyer demographics data with their lawyer count.