The latest unscientific fad among law school watchers is comparing job openings projections for lawyers from the Bureau of Labor Statistics* with the number of students expected to graduate from law school.  Frank McIntyre and I tested this method of predicting earnings premiums--the financial benefits of a law degree--using all of the available historical projections from the BLS going back decades.  This method of prediction does not perform any better than random chance.**   Labor economists--including those working at the BLS--have explicitly stated that BLS projections should not be used to try to value particular courses of study.  Instead, higher education should be valued based on earnings premiums.

Bloggers who report changes in BLS projections and compare projected job openings to the number of students entering law school might as well advise prospective law students to make important life decisions by flipping a coin.

Many law graduates won't practice law.  Many engineering graduates won't become engineers.  Many students in every field end up working jobs that are not directly related to what they studied.  They still typically benefit financially from their degrees by using them in other occupations where additional education boosts earnings and likelihood of employment.

And if one's goal really is to practice law even if practicing law is not more lucrative than other opportunities opened by a law degree, then studying law may not be a guarantee, but it still dramatically improves the odds.

*  BLS job opening projections--which are essentially worthless as predictors for higher education--should not be confused with BLS occupational employment statistics, which provide useful data about earnings and employment in many occupations, including for lawyers. 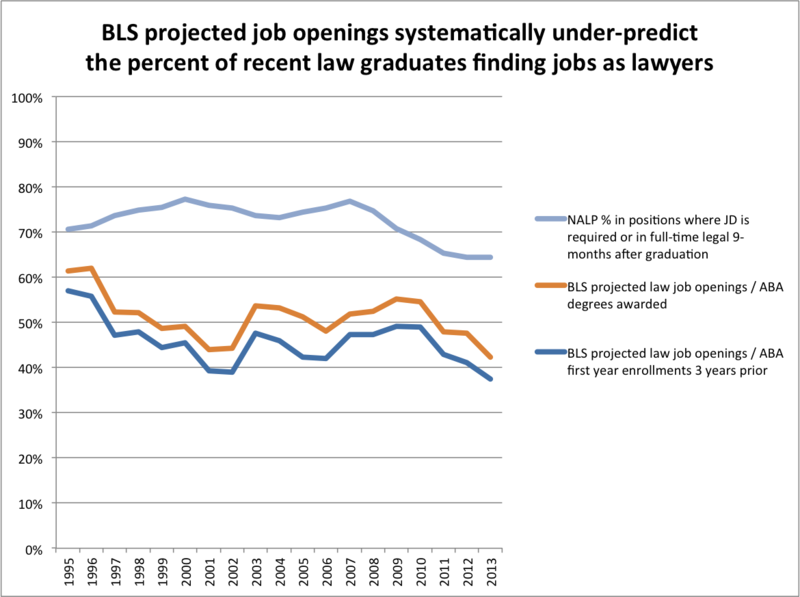