In a recent column, the New York Times’ Nicholas Kristof confessed, “One of our worst traits in journalism is that when we have a narrative in our minds, we often plug in anecdotes that confirm it.”  The quote is timely, given recent controversy surrounding New York Times’ coverage.

Newspapers tend to emphasize anecdotes over data.  This gives journalists, editors, and their sources tremendous freedom to frame a story.  A few individuals can serve as ostensible examples of a broader phenomenon.  But if those examples are unrepresentative or taken out of context, the news story can be misleading by omission and emphasis.  If you get your information from the newspaper, you might worry more about stabbings and shootings than diet and exercise, but you are roughly 38 times more likely to die from heart disease than from violent crime.

Newspapers conflated a generally weak labor market—in which law graduates continued to have substantial earnings and employment advantages over similar bachelor's degree holders (see The Economic Value of a Law Degree; Timing Law School; Compared to What? (here and here); Recent Entry Level Outcomes and Growth in Lawyer Employment and Earnings)—with a law-specific problem.  They criticized law schools—and only law schools—for practices that are widespread in higher education and in government. (see competitive scholarships; school-funded jobs, measuring employment / unemployment)   And they uncritically reported research, no matter how flawed, that fit the anti-law school narrative. (see Failing Law Schools' problems with data and citations; a free education as a hypothetical alternative to student loans; and other inapposite comparisons (here, here and here)).

Newspapers' sensationalist law school coverage may have helped their circulation—negative coverage attracts eyeballs—but it mislead students in harmful ways.  Recent research suggests that each year of delaying law school—for example, to wait until unemployment declines—is counterproductive.  Even taking into account the potential benefits of graduating into a better economy, these delaying strategies typically cost the prospective law student more than $30,000 per year because of the high opportunity cost of lower earnings with a bachelor's degree instead of a law degree.  The longer the delay, the higher the cost.

So which newspapers and journalists provided the most negative coverage?  And how has the news slant evolved over time?  For an explanation of methodology, see the footnote at the bottom.* 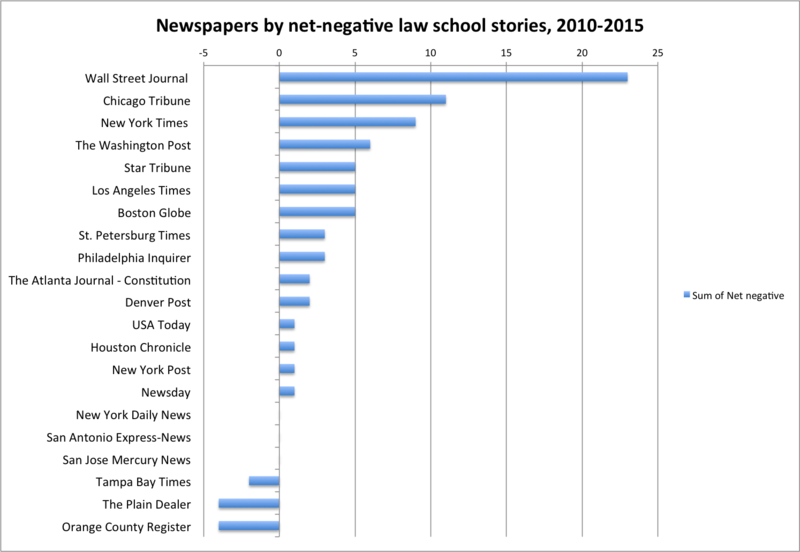 The most negative newspapers were the Wall Street journal, the Chicago Tribune, and the New York Times, in that order.  The Wall Street Journal was exceptionally negative—more than 7 times as negative as the average newspaper.  A few newspapers, such as the Orange County Register, were net positive.

2011 to 2013 were exceptionally negative years, with dramatic reductions in negativity in 2014.

The New York Times and WSJ both went negative early, but the Wall Street Journal remained more negative for a much longer period of time.  Most of the uncredited (no byline) stories in the NY Times and WSJ about law school were negative. 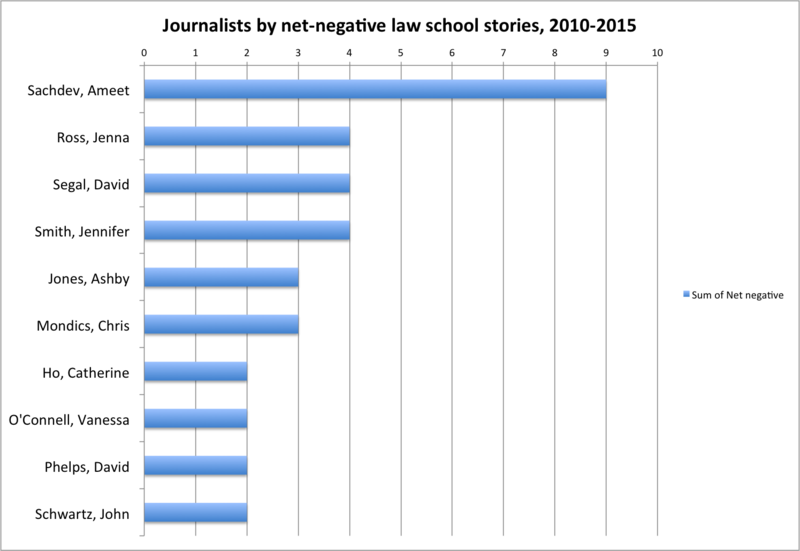 Geographically, the hardest hit areas were New York, Illinois (Chicago), and Washington D.C.  (This is counting the New York Times and Wall Street Journal as New York papers).  Ohio was the only state that saw net positive coverage. 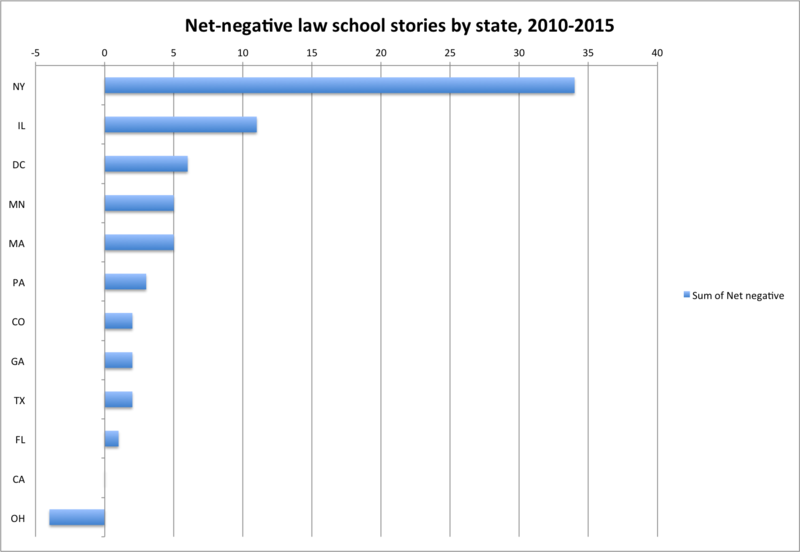 The pattern of coverage does not seem to have much relationship to the strength of the local legal employment market, but rather seems to turn more heavily on idiosyncratic editorial policies at particular newspapers that happen to be headquartered in certain states.

*  I asked my research assistant (a third year law student) to gather articles about legal education and the legal profession from the top 25 U.S. newspapers by circulation for which data was available from Proquest back to at least 2010.  My RA then rated each article as "positive", "negative" or "neutral" depending on whether the article would have made him more or less likely to attend law school if he had read it while deciding.  For each newspaper or journalist, the number of positive articles was subtracted from the number of negative articles to arrive at a net-negative count, and newspapers were ranked on this metric.  There are some obvious limitations of this approach--it doesn't measure how positive or negative each article is, it assumes that one positive article can balance out one negative article (negative articles probably have a bigger impact than positive ones), it relies on the opinion of a single third year law student.  It also lacks context—perhaps newspaper coverage about all topics is generally negative.  Perhaps newspaper coverage of all higher education was negative during this period.  Nevertheless, this approach may provide some useful insights.  All editions of the Wall Street Journal and New York Times tracked by Proquest are combined, but identical articles published in different editions are counted only once.  The WSJ blog is included as part of the WSJ.

** Contrary to popular belief, there is little evidence that larger law school graduating class sizes predict worse outcomes for law school graduates, nor is there evidence that smaller graduating class sizes predict better outcomes.  See (Timing Law School and a summary).  In a recent robustness check considering many alternative definitions of cohort size (but not yet reported in the draft paper), McIntyre and Simkovic continued to find no evidence that smaller graduating cohorts predict higher earnings premiums for recent graduates.