Do increases in the cost of college pay for themselves? (Michael Simkovic)

How much has the cost of college actually increased?  It may be less than you think.

So how much would the value of higher education need to increase to justify this increase in cost?  The increases at public institutions come to around $5,000 more for a bachelor's degree.*

That extra $5,000 will pay for itself if 4-year colleges spend the extra money in a way that boosts their former students' real annual earnings relative to high school graduates by $220.**  When we take into account increases in college completion rates over time and longer life expectancy, the required increase in annual earnings could be even lower.

So yes, improvements in the quality of education can easily pay for increases in the costs of education.   If the rising earnings premiums and increase in completion rates within race over the last three decades are caused by increased college expenditures, tens of thousands of dollars in increased expenditures per bachelor's degree have more than paid for themselves so far, and by a very wide margin.*** 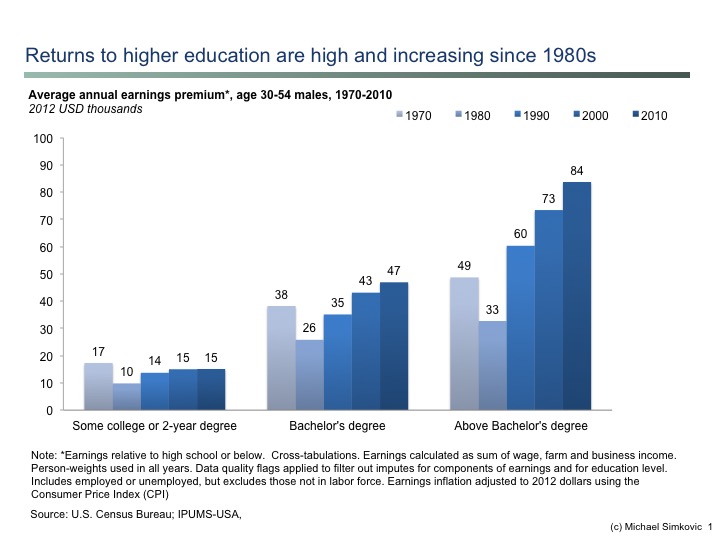 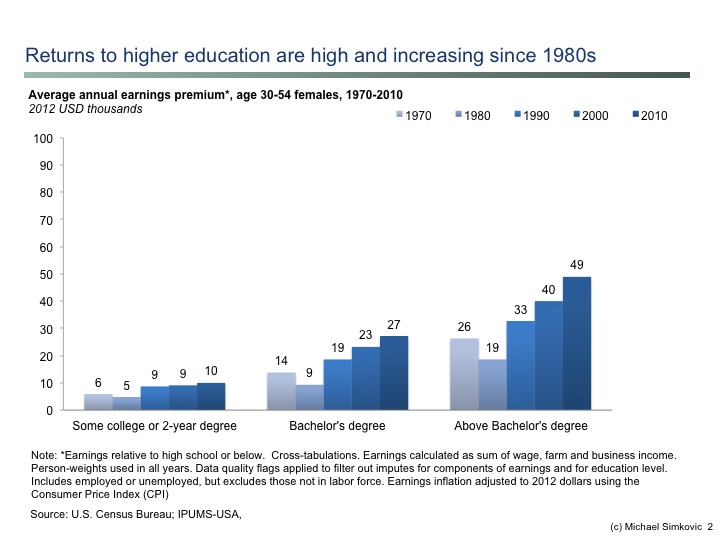 The labor economics literature generally suggests that the marginal rate of return to higher education is high, whether the "margin" is defined as upgrading individual education from high school to 4 years, from 2 years to a bachelor's, or from a bachelor's to an advanced degree.  Within a given level of education and category of institution, those with more resources can generally do more to boost their students' earnings.  A high marginal rate of return to education means we should invest more in higher education if we want the economy to grow faster, and invest less in things with lower marginal rates of return. (See here).

* Multiplying $1,000 by 5 years (assuming it takes 5 years to complete a bachelor's degree), we get an increase of $5,000 at public 4-year institutions (and a decline in cost at private institutions).  For an individual, the aggregate increase in real net-tuition during 5 years of college might be less.  The idea of the estimate is to compare the aggregate cost of college for individuals who completed college 5 years apart.

** This assumes a 40 year career and nominal (real) discount rate of 6 (3) percent.  The $220 figure is before taxes and represents the aggregate social benefit to the government as tax collector and to the graduate, who will earn higher wages.  If the entire cost is placed on the student, assuming 35 percent tax rates on the earnings premium, real annual earnings premiums would need to increase by $340 to make the student better off after taxes.