The Wall Street Journal’s recent story about law-school funded jobs is a good example of the slant that has pervaded its law school coverage for the last several years.  The general outline of the WSJ story is as follows: job outcomes for law school graduates have become so terrible that law schools are creating fake jobs for their graduates, not to help students succeed, but to game the U.S. News rankings.   The implication of the story is that law school is not only a bad idea for economic reasons, but that law schools are fundamentally corrupt and dishonest.

The problem is that the WSJ has taken information out of context and presented it in a way that is misleading.   Like a Rorschach test, the story reveals more about the Wall Street Journal than it reveals about the subject of the story.

Here are some problems with the WSJ's coverage:

1. The data visualizations are misleading 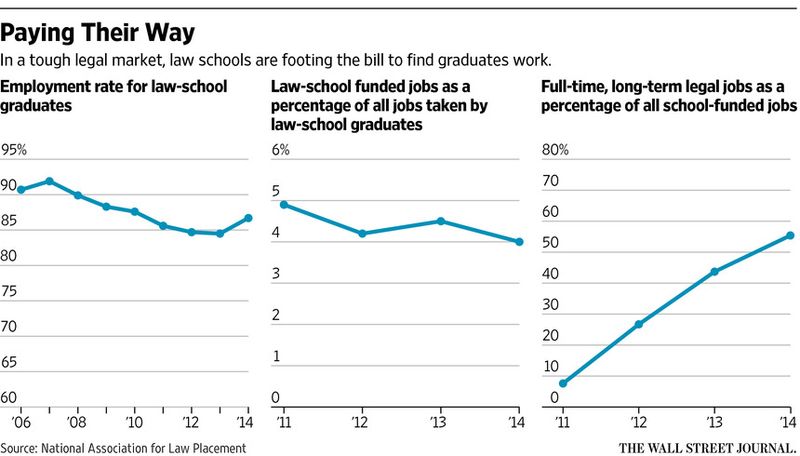 (The third chart, showing the proportion of school-funded jobs that are full time, long-term legal jobs increasing over time, is not commented on in the text of the story).

2. There is no discussion of what percentage of graduates of other programs are working positions funded by their institutions and little discussion of whether such jobs might be helpful

None of these important contextual issues are raised by the WSJ.

Even Above the Law provided a more balanced discussion of the possible upsides and downsides of school-funded jobs.

A similar issue arose with press coverage of competitive merit scholarships. Law schools were condemned harshly for policies that are also widely used by colleges and state governments, whereas colleges generally received more balanced coverage.  This was the case even though law students were actually more likely to keep their competitive scholarships than were many undergraduates.

3. There is no discussion of how overall law school employment compares to employment for recent college graduates or graduates of other programs.

The use of non-standard definitions by law schools makes law school difficult to compare to alternatives.  This does not reflect higher or lower ethical standards—it simply reflects data collection and reporting practices that are not well thought out.  It can bias the presentation of the data in a way that makes law school look worse relative to alternatives when in fact law school employment outcomes under standardized measurements are usually better than many likely alternatives.

The standard definition of employment is not the only interesting measure of outcomes, so law schools may also want to consider other measures.  But any measure they use needs to be standardized and comparable across educational programs rather than used exclusively by law schools.