Recently, The New York Times reported on law school and the legal profession based on hard data and peer reviewed research rather than anecdote and innuendo. The New York Times came to the conclusion that anyone looking honestly at the data would naturally come to—law school seems to be a pretty good investment, at least compared to a terminal bachelor’s degree.

This contradicts the story that Mr. McEntee has been telling for the last few years. Mr. McEntee is not happy with The New York Times.

Mr. McEntee suggests incorrectly that The New York Times reported Georgetown’s median private sector salary without providing information on what percentage of the class or of those employed were working in the private sector.   (Mr. McEntee also seems to be confused about the difference between response rates—the percentage of those surveyed who respond to the survey or to a particular question—and response bias—whether those who respond to a survey are systematically different along the measured variable from those who do not).

Last year, 93.2 percent of the 645 students of the Georgetown Law class of 2013 were employed. Sixty percent of the 2013 graduates were in the private sector with a median starting salary of $160,000.

In any case, it is clear that The New York Times provided information about the percent of graduates working in the private sector.

Mr. McEntee also repeats the odd claim that by reporting employment numbers that appear to be close to consistent with the standard definition of “employment” established by the U.S. Census Bureau and promulgated internationally by the International Labor Organization, The New York Times is somehow misleading its readers.

Mr. McEntee also inaccurately describes my research with Frank McIntyre, claiming incorrectly that we do not take into account those who graduated after 2008.  Timing Law School was specifically designed to address this limitation of our earlier research.

Timing Law School includes an analysis of two proxies for law school graduates from the American Community Survey: (1) young professional degree holders excluding those working in medical professions, and (2) young lawyers.  This analysis includes individuals who graduated as recently as 2013, and finds no evidence of a decline in recent law graduates’ outcomes relative to those of similar bachelor’s degree holders.  (See also here for a discussion of recent data for the subset of law graduates who work as lawyers). 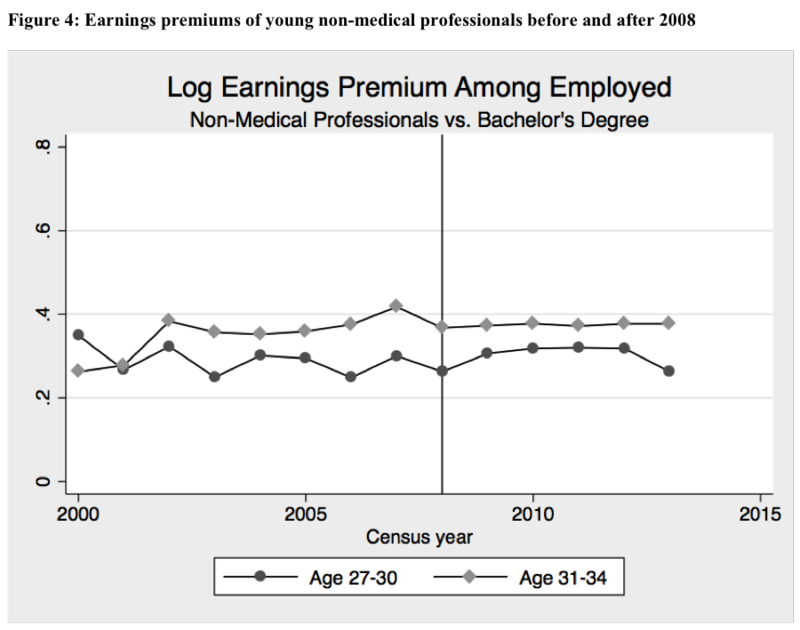 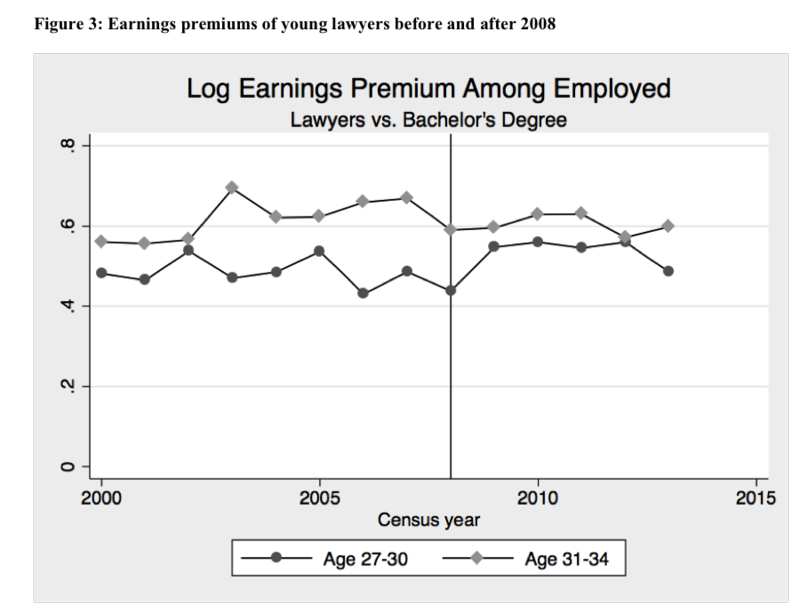 Moreover, in Timing Law School we find that fluctuations in short-term outcomes for recent graduates are not good predictors of outcomes for those who are currently deciding whether or not to enter law school; long term historical data is a better predictor.

The Economic Value of a Law Degree did not include data on those who graduated after 2008 because such data was not available in the Survey of Income and Program Participation.  However, it did include earnings data through 2013, and found no evidence of the earnings premium for law graduates declining in recent years to below its historical average. 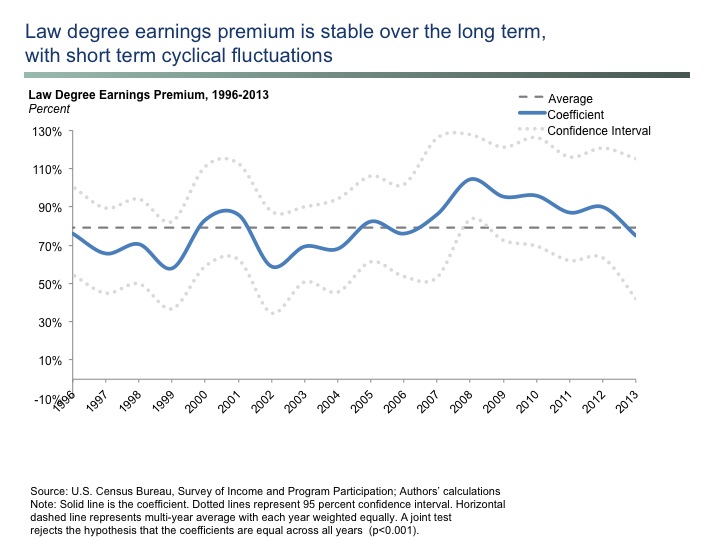 Frank and I have noted repeatedly that our analysis compares a law degree to a terminal bachelor’s degree and that we think an important area for future research is careful comparative analysis of alternate graduate degrees, being mindful of selection effects (read The Economic Value of a Law Degree or for the most recent example, see our post from two days ago).  While a casual (i.e., not causal) examination of raw data suggests that a law degree likely compares reasonably well to most alternatives other than a medical degree, we’ve noted that it’s possible that more rigorous analysis will reveal that another graduate degree is a better option for some prospective law students, especially when subjective preferences are taken into account along with financial considerations. 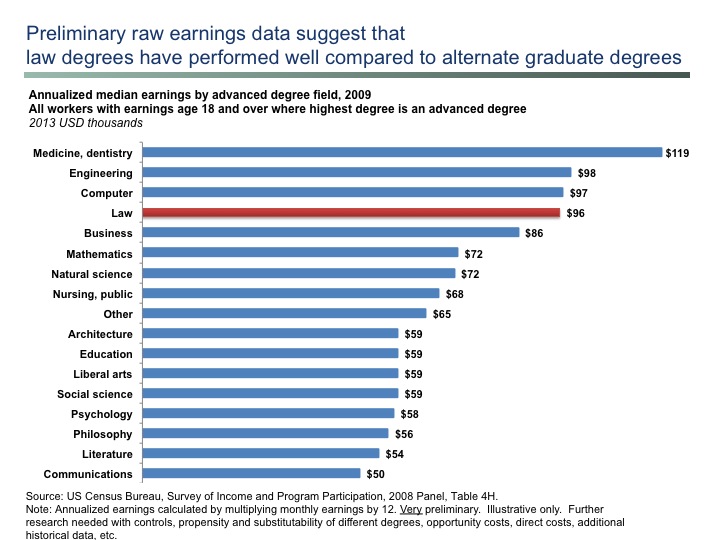 Mr. McEntee claims incorrectly that when it comes to other graduate degrees, “McIntyre and Simkovic don’t know and don’t care; they’re convinced that the value of a law degree as immutable as the laws of nature.”

Mr. McEntee insists that law graduates, even at the higher ranked schools, will find it challenging to repay their student loans.  However, data from After the JD shows that law school graduates from the class of 2000/2001 have been paying down their loans rapidly. 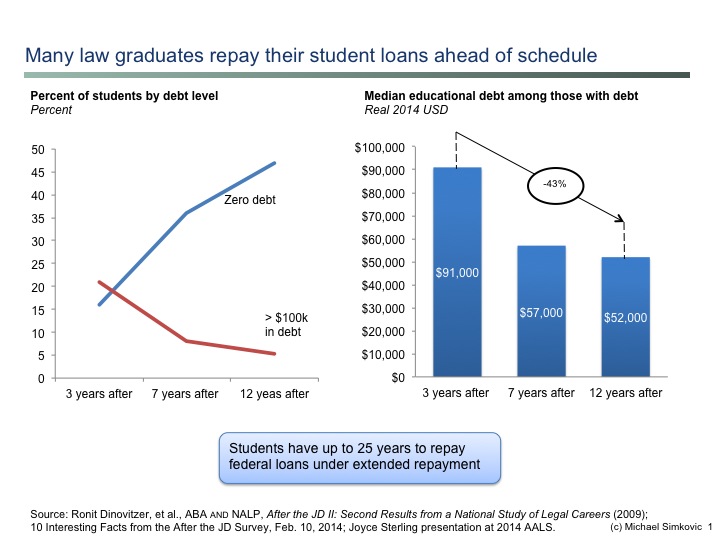 What about those who entered repayment more recently, when tuition was higher and job prospects less plentiful?

Data from the U.S. Department of Education shows that law students, even at low ranked law schools, remain much less likely to default than most student borrowers.  This is true even though law students typically graduate with higher debt levels. 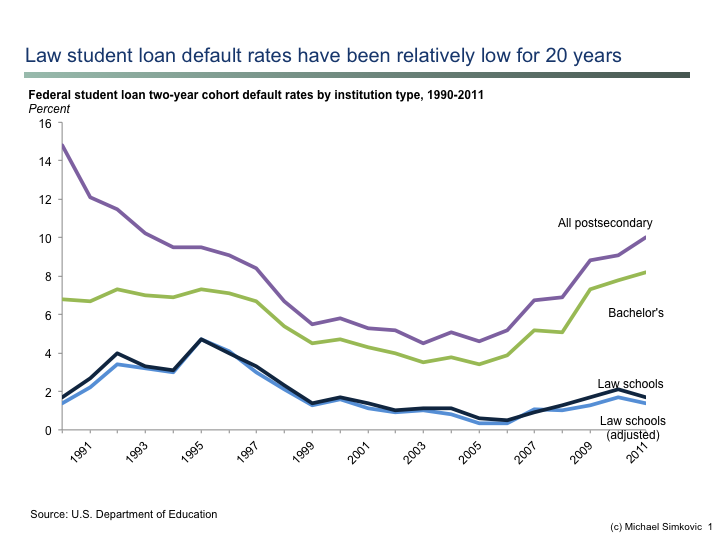 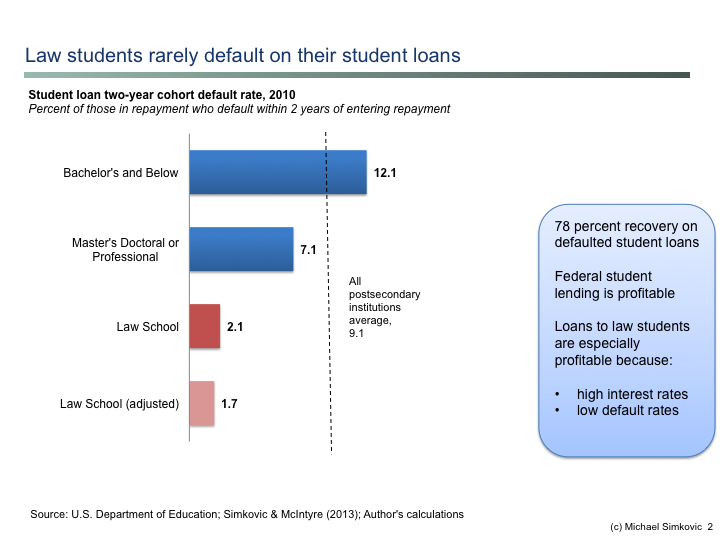 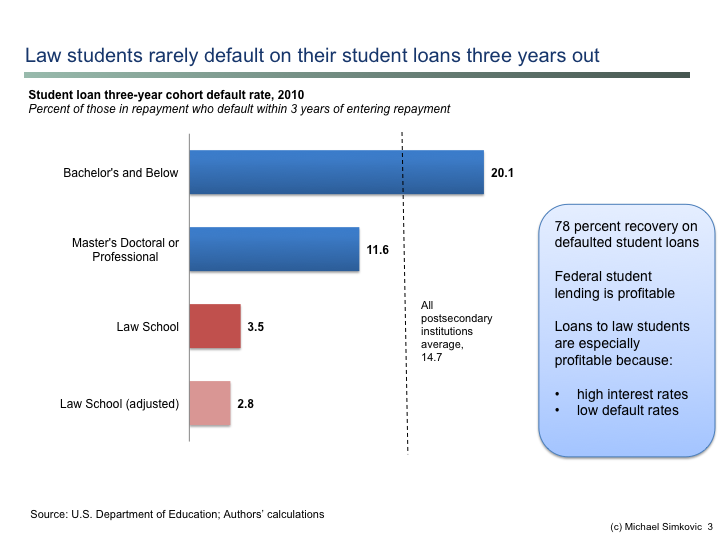 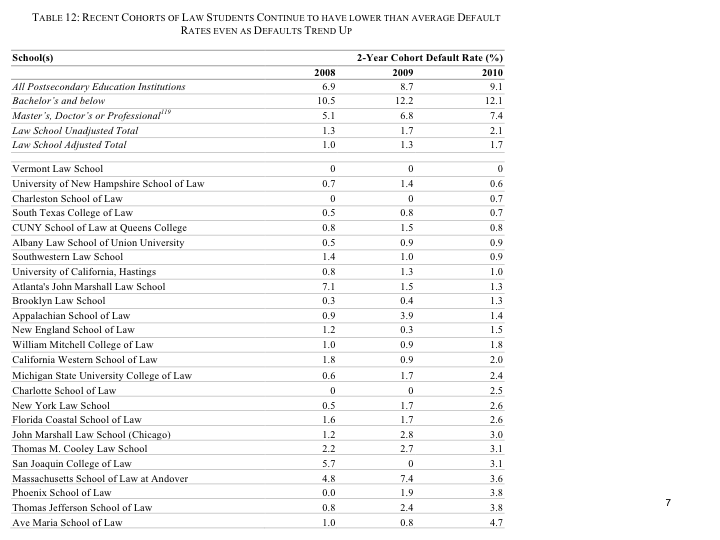 Indeed, The Economic Value of a Law Degree suggests that law graduates generally have higher incomes after taxes and after paying additional debt service than they likely would have had with a terminal bachelor’s degree, even before taking into account debt forgiveness available under Income Based Repayment plans.

Based in part on our research, private student lenders have noticed how unlikely law graduates are to fail to repay their loans.  These lenders offer refinancing at substantially lower rates than those charged by the federal government, further reducing the costs of legal education for many graduates (while earning a profit in the process).

No matter what new information becomes available, Mr. McEntee insists that law school is financially disastrous.  This is curious for a public figure who claims that his goal is providing prospective law students more accurate information about law school.