The Absence of Evidence for Structural Change: Growth in Lawyer Employment and Earnings (Michael Simkovic)

There have been a lot of doom-and-gloom reports about layoffs and collapsing job opportunities for lawyers.  As we’ve noted before, the relevant question for valuing legal education is the boost to earnings from the law degree across occupations, not the more specific question of what is happening to lawyers, or even more specifically, big law firms.

But for the sake of argument, focusing more narrowly on the under-inclusive category of lawyers only, what does the data actually show about lawyer employment?  Are doom-and-gloom predictions justified for lawyers even if not for law degree holders?  According to many of the proponents of the structural change hypothesis, signs of structural change were showing up as early as 2010, or perhaps even as early as 2008.  We now have several years of historical data beyond that point to consider whether their predictions, thus far, have proven correct.

Lawyer employment is growing.  This is true both in absolute numbers, and also relative to overall employment.  In other words, lawyers are becoming a larger share of the U.S. workforce. 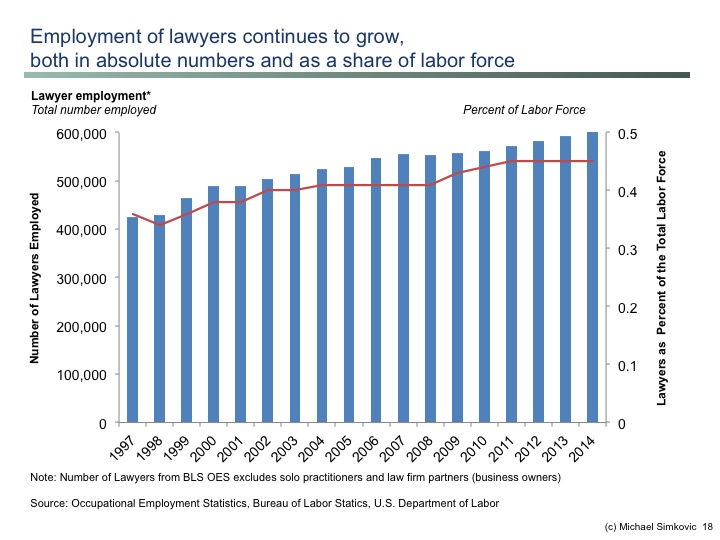 The data in the chart above is from the U.S. Department of Labor, Bureau of Labor Statistics (BLS), Occupation Employment Statistics (OES), which is a survey of establishments (employers). The blue columns scaled to the left axis represents the absolute number of lawyers, while the red line scaled to the right axis represents lawyers as a percentage of the total labor force.  As can be seen from the above chart, both numbers are trending upward.

One limitations of BLS OES is that it focuses on employees, not owners, and therefore excludes law firm partners and solo practitioners.  Another leading source of data, the U.S. Census Bureau’s Current Population Survey (CPS), is a survey of households, and includes solos and law firm partners.

CPS shows much the same trend as BLS OES.  Lawyer employment is increasing, both in absolute terms and as a share of total employment.  The charts below show CPS data. 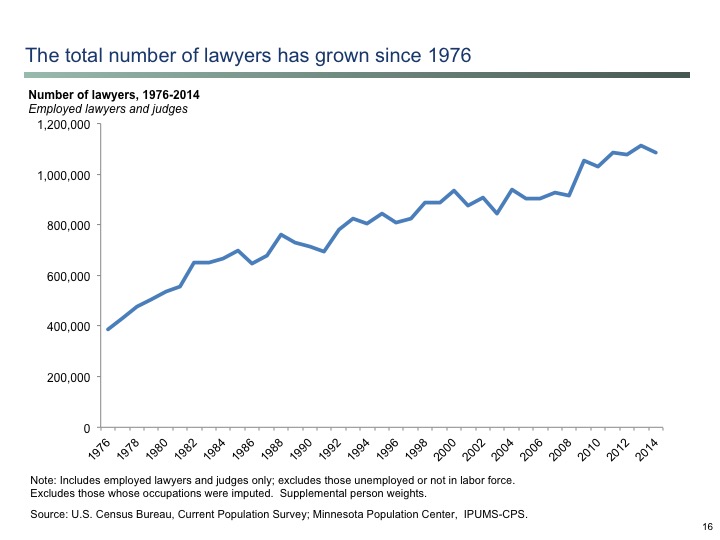 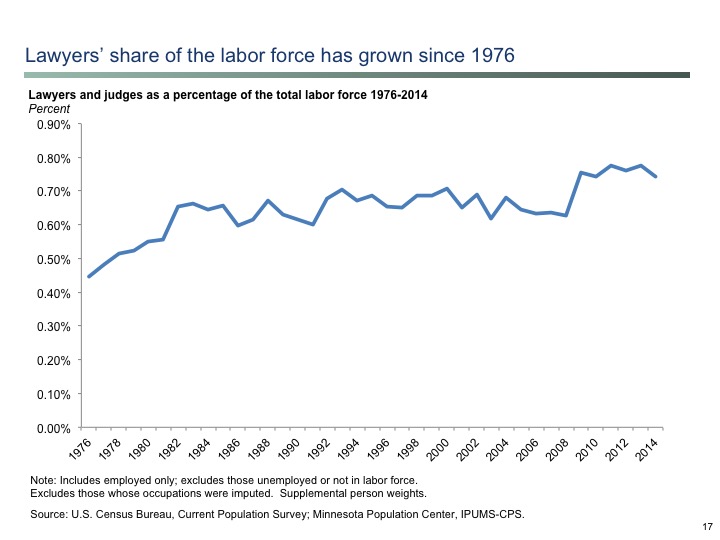 The leading government data sources show the same thing—growth in employment of lawyers is faster than (or at least as fast as) overall employment growth.

The practice of law is also becoming more lucrative, at least over the long term.  According to a recent draft paper by Richard Sander and E. Douglass Williams, after controlling for changes in the demographic composition of the legal profession, Sander and Williams find long-term growth in real (inflation-adjusted) lawyer earnings.  (Sander and Williams use IPUMS-CPS data, and focus on white males, since historical data is not as readily available for women and minorities who have joined the legal profession in large numbers only in recent years; To understand the importance of controlling for demographic changes in the profession, consider Simpson’s Paradox).

Data from the Sander and Williams study is provided in the chart below. 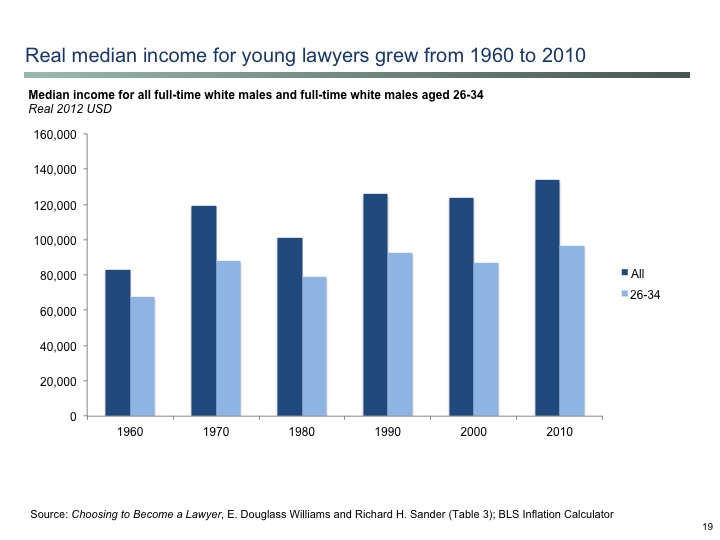 After 2010, the picture for lawyer earnings is more mixed.  BLS OES data suggests modest declines in real earnings of lawyers of around 6 percent by 2014.  By contrast, the CPS suggests modest real growth in lawyer incomes of around 3 percent by 2014.  Overall, it’s likely that real lawyer earnings have been close to flat.  Flat earnings are consistent with what has been happening elsewhere in the labor market (see here and here).  Given lawyers’ highly advantageous starting position relative to most other occupations, flat earnings or even modest declines suggest that lawyers have maintained a large relative advantage even as they have grown in relative numbers.  (It’s possible that incomes for lawyers may have become more dispersed over time, notwithstanding the averages—indeed, it would be surprising if that were not the case, given the general trend toward widening income dispersion across the economy).

As noted previously, changes in entry level earnings and employment, though larger than those for the profession as a whole, are consistent with changes at the entry level for the rest of the labor market and established historical patterns.  Young law graduates continue to earn substantially more than young bachelor’s degree holders post 2008.

Within a few years of graduation, about as large a proportion of employed young professional degree holders were working as lawyers after 2008 as before 2008. 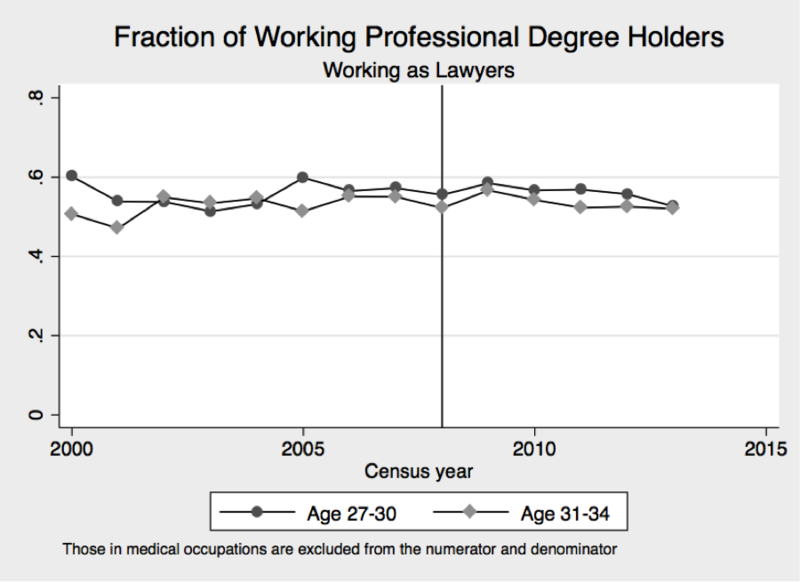 Some critics of legal education have focused on “legal services” (mostly law firms).  This is not a good measure of either the value of a law degree, or of the labor market for lawyers.  Most employees in “legal services” are not lawyers, but rather support personnel such as secretaries, paralegals, and business and technology specialists.  Many lawyers and law degree holders work outside law firms.

BLS and CPS data for “lawyers” provides a much clearer picture of the legal employment market, while law earnings premiums across occupations are the most useful measure of the value of a law degree.

Growth in earnings and employment has been slower in recent years than in the past, to be sure, but that is generally true across the economy.  The case for massive structural change in the legal profession eroding the value of a law degree is not well supported by the data.