Paul Campos is back for the holidays, defending cyber-harassment and sexist abuse!

I've been enjoying a holiday from the sordid nonsense in the law-related blogosphere, but multiple readers have e-mailed me over the last few days to point out that Crazy Campos ("CC") spent his Xmas week attacking an untenured law professor for having the audacity to object to sexist cyber-harassment.  (Some have blogged about it already.)  This latest malevolent stunt by CC goes well beyond his delusional cyber-rampage against me earlier this year, though like that last one, it appears to have been brought on by the fact that CC felt he was defending some of his loyal cyber-followers.

Some background:  CC continues to blog at a site called Lawyers, Guns & Money, which Glenn Greenwald memorably described as "a cesspool of unprincipled partisan hackdom" and "a filthy cesspool."  CC's primary contributions to this "filthy cesspool" consist in continued smears of law schools and law professors.

As we noted a couple of weeks ago, Denver's Nancy Leong filed an ethics complaint (which I have now seen) against "M," a criminal defense lawyer in his mid-40s here in Chicago, who has spent hundreds (!) of hours over the last year or so harassing, ridiculing and defaming Professor Leong and lots of other law professors using the pseudonym "dybbuk" (and variations); among other things, he has written multiple blog posts and thousands of words devoted to ridiculing articles overwhelmingly by female and minority faculty.  Here are some examples of his sexist harassment of Prof. Leong (all taken from the complaint and verified by screen shots of the postings):

On August 12, 2012, M described Prof. Leong as a “law professor hottie at Sturm School of Law” in a comment disparaging her scholarship and professional qualifications.

On August 12, 2012, M said of Prof. Leong's attendance at a professional conference:  “All [the law professors] have to do is attend some ‘annual meeting’ of some ‘society’ where they pretend to listen to Leong yap about ‘pragmatic approaches of reactive commodification,’ while undressing her with their eyes.”

On September 11, 2012, M described Prof. Leong as a “comely young narcissist” in a comment disparaging her scholarship and professional qualifications.

On September 22, 2012, M described Prof. Leong as a “comely young scam defender” and emphasized that a link contained “Leong’s CV, photo included!” in a comment extensively disparaging her scholarship and professional qualifications.

On October 18, 2013, M defended his various “wisecracks and other offensive comments about [Leong's] pulchritude” by explaining that “[I]t is an unsayable truth that attractive persons, of both genders, are sometimes rewarded in ways they do not necessarily deserve.  I believe social scientists call this ‘sexual capital.’”

M is one of the regular bloggers [at a scam blog].  Comments on the blog are moderated before appearing and can be removed.  Entire posts are sometimes removed...M’s posts about Prof. Leong on that blog generated a large number of comments that were sexist, racist, harassing, false, or defamatory.  Despite being the author of the posts, he did nothing to discourage or remove the comments.

It's actually worse than that:  M clearly encouraged the harassment, and posted appreciative comments to fan the flames.  (Prof. Leong documents this in the complaint.)

As Professor Leong noted in one of her prior posts about cyber-harassment, M's sense of "humor" is of a piece with his puerile sexism, as in this charming item about an unemployed female law graduate: 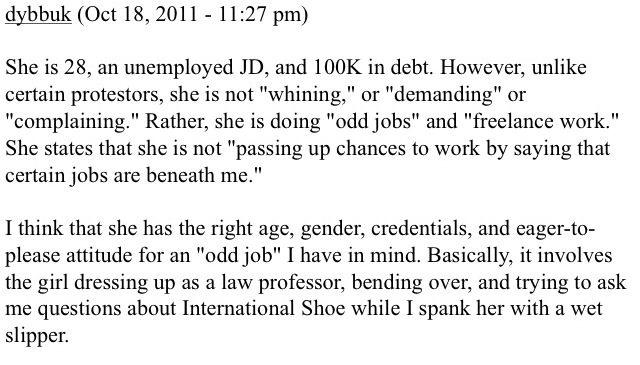 M is a creepy and pathetic individual, but as Prof. Leong noted, he also made the mistake of having "posted specific information about his alma mater, the city where he lived, his job, various professional organizations to which he belonged, and other miscellaneous information.  It took fifteen minutes to find out who he was using google and other publicly available databases.  The result was troubling in itself: he was a public defender in his late forties who apparently has nothing better to do than harass an untenured professor."  (Amusingly, M's response to all this was to claim Prof. Leong was "harassing" him!  You really can't make this stuff up.)

Astonishingly, CC has now come to M's defense, taking it upon himself to ridicule Professor Leong for daring to object to sexist and racist abuse in cyberspace!   Interestingly, even the commenters at Campos's "filthy cesspool" of a blog were appalled by these posts, which they describe better than I can:

#1:  It is shameful that, after all the sexist and other harassment that dybbuk and his ilk have heaped on this untenured professor (and encouraged from others) over the course of more than a year, that Campos has piled on with his second derogatory post about her in two days. It is shameful that he and others are parsing her wedding announcement, citing his “sources” at UCLA where she is apparently looking for a job as if he has some inside info about her. I hope she sues this tenured professor for defamation. His headline in yesterday’s post certainly sounds defamatory to me and wholly invented out of thin air.

#2:  It’s thoroughly messed up that Campos has chosen to attack Leong by questioning her racial identity (biracial people can indeed be subject to racism) and deriding her scholarship as an exercise in pure narcissism. This is sexist, racist garbage and [this blog] should be ashamed for publishing it.

#3:  I’ve been enjoying reading this blog in the last few weeks, and finding an interesting mix of labor issues, feminism, and anti-racism. These two posts about Leong, however, are utterly shocking and disappointing. It’s perfectly possible to criticize problems in legal academia without minimizing racist and sexist behavior, or engaging in it – perfectly possible but not, it seems, in this case. Other people have asked Campos to stop posting on this issue. I would like to see an apology for what he’s already said before I decide whether to continue reading his posts, or indeed this blog.


#4:  This post, and Paul’s one from the other day, are the most disturbing, mean-spirited, ill-conceived, and baseless I’ve read on this blog. It makes me question whether I want to be part of this community at all. The so called “criticism” of Professor Leong, such as it is, amounts mostly to name calling, coupled with personal attacks. So far, Paul has called our attention to (1) a blog post and (2) a short article written by this professor. Her cv reveals that the article in question was one of four she wrote during that YEAR. Let’s compare Paul’s cv. He has written three articles since 2006. Personally, I thought the Open Road piece (or at least the introduction, which is all I read) was mildly interesting. But WHO CARES! I suspect Professor Leong wrote it as an interesting, light-hearted way of talking about an issue — racial profiling — that people have talked about a lot. It’s not like this was the ONLY article she wrote. But something about her race, gender, appearance, youth or whatever has captured the mind of Paul Campos and his cronies and so they’ve engaged in a prolonged character-assassination campaign.

#5:  Paul Campos latched on to Nancy Leong’s statement on her personal blog that she used a racially ambiguous photo of herself in profiles on a variety of dating web-sites as justification to discuss her race (“tenuously racialized”), whether she could “’pass’ as ‘white’”, and whether she is trying to “leverage her putatively marginalized racial/ethnic status for professional purposes.” This is racist (and stupid). I’m white as wonder bread and I could take a racially ambiguous picture of myself with the right lighting and a few minutes on Photoshop. He further suggests that her race is now a matter for public debate because “she chose to make her ethnic identity a central feature of the complaint she says she filed with the bar against Dybbuk.” As far as I can tell, we don’t know whether a complaint was filed and even if one was we don’t know what its gravamen is. What we know is that Leong found one comment of Dybbuk’s to be racist and a bunch of other people disagree. Leong’s identification of this as racist may open the door to a discussion of the remark, but it does not (in my mind) open the door to discussion of her race. This too is racist and retaliatory. As for sexism, Campos’s minimization of the obvious sexism in several of Dybukk’s remarks yesterday is itself sexism. That one’s pretty easy – it’s sexist to say that it’s no big deal when other people write sexist stuff. Finally, it is retaliatory to write two attack pieces about someone because you’re angry that she called one of your friends out for (perceived) racism and sexism and (purportedly) filed a bar complaint, and because it’s seeking to punish someone for complaining about sexism and racism, it too is racist and sexist (and would, for example, violate Title VII if done in the workplace).

The following is probably a good "rule of thumb":  if those who comment at your "filthy cesspool" of a blog think you've violated some norms of decency, you probably have.

Strikingly, Campos actually admits at the end of his hit piece that he himself does not know how to “carry[] out serious academic work or train[] people to practice law."  (Yes, he admits it!) It appears to be the only true statement he's managed to make of late.

I'll conclude with a hopeful thought from one of CC's colleagues at Colorado (where he is not, as one might imagine, a "beloved colleague"):   "I think and/or hope that while Campos still is mentally ill and quite degenerate, he’s burned through the 15 minutes of fame that let him have more of an audience than the standard faculty crank."  Barring some further extreme nuttiness from CC, we are looking forward to a CC-free 2014.